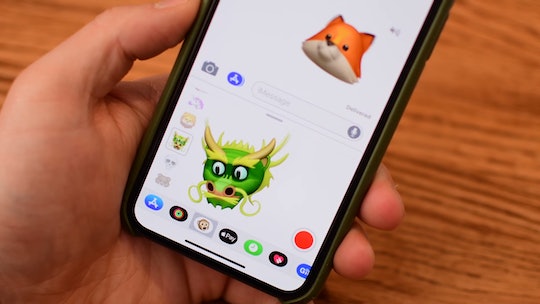 How To Get The New Animoji With iOS 11.3, Because There's A Dragon

Sick and tired of only have 12 different cartoon masks to use in your iPhone X messaging app? Stop reusing that unicorn over and over like a damn savage! There are more options now, so here's how to get the new Animoji with iOS 11.3, the newest Apple update. A word of caution, though: though it's available for anyone to download, currently, iOS 11.3 is only in beta, so it's possible that you'll run into some glitches. cNET cautions users not to install test software on a phone that you "rely on daily," so if you've still got your old one kicking around, maybe try that, first.

Apple released a test version of iOS 11.3 to developers on Wednesday, and though the company usually waits longer, it released it to customers the following day. All you have to do to get it is sign up for Apple's Beta Software Program. Just enter your Apple ID and password, and you're good to go. Apple recommends that customers back up their device with iTunes prior to installation, just in case. If you do encounter any bugs, you can report them through the Feedback Assistant app. Now you're ready to transform yourself into a bear, lion, dragon, or an adorable skull.

Animoji are still only available for iPhone X users, unfortunately, but you can still send them to anyone using an iOS device, Mac, or smartphone. To use one, open the Messages app, then tap the app icon next to the text input area, then the Animoji icon (the monkey). Choose the Animoji you'd like to use, and then look straight at your phone. The camera will superimpose your facial expressions and voice onto the creature of your choosing, and you can record a video up to 10 seconds long and send it to whomever you like. Just don't record yourself having a coughing fit and then send it to your daughter unless you want it to go viral (feel better, Momma!).

The finished version of iOS 11.3 is coming this spring, in case you're wary of beta testing, and besides the four new Animojis, there are a ton of exciting new features. Augmented reality is getting a big upgrade, according to Apple, with 50 percent greater resolution on the camera, and the ability to recognize 2D images like signs, posters, and artwork, which will enable things like interactive movie posters and museum exhibits. You'll also be able to place AR items on vertical surfaces now, rather than just horizontal ones.

iOS 11.3 also features Business Chat, which lets you communicate with customer service reps, schedule appointments, and even make purchases without having to navigate one of those dreadful automated phone systems. Discover, Hilton, Lowe's and Wells Fargo are already on board. And the new Health Records feature will allow you to view encrypted medical data from all your providers, and even receive lab result notifications. A dozen facilities — including Johns Hopkins and Cedars-Sinai — have already signed up for the beta version, according to cNET.

There are a few more intriguing changes on iOS 11.3, as well: Apple Music will now allow users to stream unlimited music videos, ad-free, Apple News has an improved Top Stories feature, and when you delete an iMessage on one device, it'll reflect that universally. iOS 11.3 also supports Advanced Mobile Location, which automatically sends your coordinates when you call 911. And if you're still burnt up about having an older iPhone, there's something special just for you: you'll be able to monitor your battery health, and if you don't want Apple throttling your phone when it starts to wear out, you can finally turn that feature off. But you still can't be a lion, so maybe it's time to upgrade, after all.