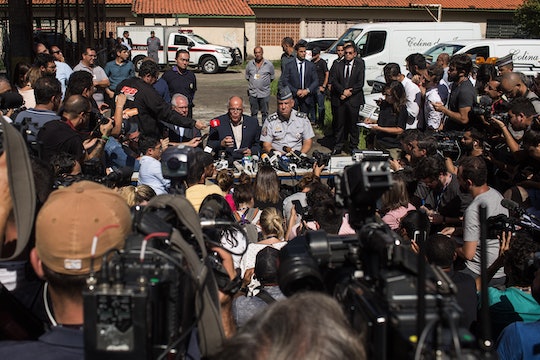 Another day, another act of gun violence — this has been my reaction every time I see another victim has died because of a firearm in the U.S. (It's sad, but it's true.) Whether it's a mass shooting, an accidental discharge, or domestic violence to the extreme, I'm sickened by how easily-accessible guns are in this country. However, this time, a mass shooting happened on the soil of another country: Brazil. So here's how to help families in Brazil after a tragic school shooting left several dead.

On Wednesday, March 13, two gunmen entered the Professor Raul Brasil school in Suzano, which is a satellite city of São Paulo, Brazil, according to The New York Times. The young gunmen opened fire at 9:30 a.m. during a snack break, killing six students and two school officials, as NBC News reported. Ultimately, they ended up killing 10 people — including six students and two school officials — as well as themselves, according to NBC. There were 10 other people injured during the attack at the school, at which more than 1,000 students between ages 11 and 16 attend, according to Reuters. Police have not yet determined a motive.

"I was in the classroom during our break. I thought [the sound] was from bombs. When I realized they were gunshots, I stayed there. I only left when the police arrived," Sandra Perez, a teacher at the school, told O Estado de S.Paulo newspaper in Portuguese, BBC News reported.

"It is the saddest scene I have seen in my whole life," governor of Sao Paulo state, Joao Doria, said at a news conference on Wednesday, according to The Washington Post. "These teenagers were brutally assassinated."

For those who are horrified and heartbroken over today's attack, let's take a look at what you can do to help families of the victims.

Donate to families, if you can.

Thoughts and prayers are great and all. But if you're able, families of victims are obviously grieving the loss of their loved ones — and will soon be paying for funerals. Any help financially, I'm sure, would be appreciated. The shooting is still fresh, but keep your eyes peeled for legitimate GoFundMe campaigns raising money to offset funeral costs.

Donate to non-profits helping on the ground.

Following a tragedy of this type, non-profit organizations typically step up to help in any way they can — whether it's again, with funeral costs or helping feed families of victims as they navigate the aftermath of the worst day of their lives. Or perhaps even the Brazilian Red Cross, as I'm sure blood has been/will be needed for shooting victims who are still in hospitals.

According to Reuters, a graphic video taken during the shooting was aired by Globo TV. It shows children screaming and running as shot can be heard. As shocking and horrific as the images may be, sharing them doesn't help anything — and it doesn't help families of victims to have circulating online, either.

Although we can't control gun laws in other countries, we can work to make our own nation a safer place. By supporting safe gun legislation, you can help ensure more people don't have the same fate as the victims in Brazil.

You may feel helpless during the aftermath of the mass school shooting in Brazil, but that doesn't mean you can't help families of the victims of in some small way — even from here, in the United States.