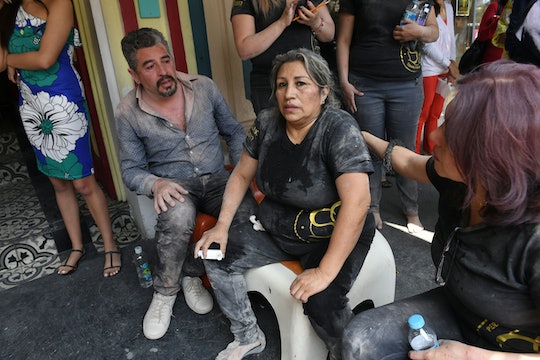 Here's How You Can Help The Mexico City Earthquake Victims

A powerful earthquake hit Mexico City on Tuesday, leaving at least 217 dead, according to CNN. The 7.1 magnitude earthquake happened just more than a week after an 8.1 magnitude quake struck just off the coast of Mexico, killing at least 90. Rescue crews have continued to dig out those trapped in rubble throughout the city, and the damage to the city is extensive. In the wake of two extensive back-to-back disasters, here's how to help Mexico City earthquake victims. In the aftermath of such disasters, cash is king — which means your donation dollars are going to be one of the most effective ways to help earthquake victims.

As I've mentioned in the past here, sometimes the best way to help in the wake of disaster is to contribute directly to local organizations who are already on the ground. One such effort following the Mexico City earthquake is a verified donation portal collecting funds to assist the victims. The PayPal donation site goes to the Graphic Arts Institute of Oaxaca, Mexico, organized by Denise Lechner Edelkind, a National Geographic photographer and anthropologist in the field in the affected area, as well as the Francisco Toledo’s Foundation IAGO, a foundation for the Oaxaca artist and activist of the same name.

Children are of particular concern in the aftermath; The Telegraph reported that at least 22 children had been killed after their school collapsed during Tuesday's earthquake. Rescuers are continuing to try and reach as many as 40 children and adults who were at the school and are still missing.

Project Paz, a New York City-based non-profit organization helping Latino children throughout the United States, has organized a Mexico Earthquake Relief fundraiser in partnership with the El Paso Community Foundation. You can make your donation online and allocate the funds to be used towards either the Sept. 8 earthquake in Chiapas and Oaxaca or Tuesday's quake in Mexico City. My suggestion? Make two donations — one for each, because the region's resources have been stretched thin to respond to two such major natural disasters that have occurred so soon one after the other.

For those of you who want to help the victims of Mexico's earthquakes in a more specific way, you can actually help support Red Cross Mexico with more than just making a monetary donation: You can buy much-needed earthquake relief supplies from Red Cross Mexico's Amazon Wish List. (Note that the link and page are in Spanish, but if you have Google Chrome, you can auto-translate it right within your browser.)

Tuesday's earthquake in Mexico City came exactly 32 years to the day since the devastating 1985 Mexico City earthquake that left more than 5,000 people dead. In a truly eerie coincidence, Tuesday's earthquake struck Mexico City just hours after it had completed an earthquake drill, an annual occurrence in cities throughout the country on the anniversary of Mexico City's 1985 catastrophic earthquake. As Mexico City, Chiapas, and Oaxaca dig out from the rubble, sending whatever help we can, be it a donation or buying relief items on Amazon, is critically important.

More Like This
Reddit Is Not Impressed With Dad Who Hid Neighbor's Gnome Because It Scared His Kid
Obamas Issue Powerful Statements After Supreme Court Ends Roe v. Wade
Viral TikTok Breaks Down How Beautifully Bluey Depicts One Character’s Infertility
Keep Talking To Your Kids About Abortion — It's More Important Than Ever