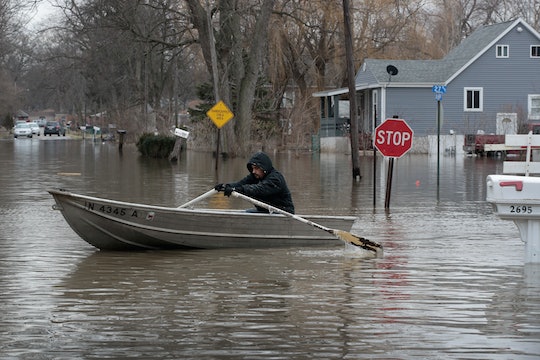 Here's How To Help People Affected By Midwestern Floods

Heavy flooding is wreaking havoc on Nebraska, Wisconsin, and other nearby states, leaving people stranded, scared, and feeling helpless. States of emergency have been declared, and evacuations are underway, but in the meantime, flood waters continue to rise and danger is ever-present for locals. There are a number of ways to help people affected by flooding in the Midwest, including Nebraska, Iowa and South Dakota, as outlined in an article from the Omaha World-Herald and other resources. Per a report from The Washington Post, rain associated with the bomb cyclone, as well as melting of snow buildup from a long winter, played a part in the flooding, which has created dangerous conditions for people across the Midwest.

Flooding began in Nebraska, Iowa, South Dakota, and other midwestern states last week, and persisted over the weekend, according to CNN. Per the outlet, the high waters were the result of rain, a powerful "bomb cyclone," and natural snow melt from the spring thaw. As of Friday, at least 37 people had been rescued from flood waters, and Nebraska National Guard Adjutant General Daryl L. Bohac told CNN during an afternoon briefing that rescues would continue. Gov. Pete Ricketts sent a warning to Nebraskans, per CNN, urging them to "watch the weather and waterways in their communities closely ... and be prepared for historic levels of flooding even if it has not hit their community." The message should be heeded by people in all affected areas, not just Nebraska.

The site reported that Omaha Fire Chief Dan Olsen said the Nebraska National Guard deployed black hawk helicopters to certain rescues across the state. Olsen said, per CNN, "boats, helicopters, large vehicles and even tractors" were being used to help provide relief. Olsen urged people affected by the flooding to listen to evacuation suggestions, and not wait until it's too late. Nebraska State Patrol send a similar message on Twitter on Sunday morning, adding, "If your home is currently in an evacuation area, please don't return until it's authorized."

Due to the devastation, several agencies have mobilized to help the people of the Midwest. Per a widely circulated Tumblr post, Catholic Services of Southern Nebraska, Nebraska Farm Bureau, and The Grand Island Community Foundation are all currently taking donations to help with relief. A Facebook fundraiser has been established to contribute to the Grand Island Community Foundation's disaster relief fund, as well, according to the post. United Way has, per the Tumblr page, begun collecting funds to help flood victims in Nebraska, Iowa, and Wisconsin. The post also revealed that both the Red Cross and Salvation Army have set up shelters to help displaced people, and are accepting donations to help midwesterners.

Additional efforts are being made by individuals and local organizations, all of which are being highlighted on a Facebook page established to keep track of smaller relief efforts. The page includes postings about purchasing clothes for individuals, offering transportation to safety, pet supplies, and so much more. If you're looking for a way to help, you may well find it on this Facebook page.

According to the Omaha World-Herald, The Salvation Army has set up a donation center in Omaha, allowing those in the area able to access it to donate clothes to those who need them. The center will, according to the newspaper, be open from 12 p.m. to 7 p.m. local time. The Salvation Army is seeking flood-cleanup supplies, like shovels, masks, disinfectant, and tarps, as well as bottled water and sports drinks.

The local Salvation Army also teamed up with NRG Media on Saturday for a water drive, held at the Nebraska Furniture Mart and Fresh Thyme stores in Omaha, according to the Omaha World-Herald. Those who weren't able to attend can visit salarmyomaha.org to donate using a special tab set up for this relief effort, according to the outlet. The agency is seeking more volunteers for its efforts, the Omaha World-Herald reported. If interested, and in the area, you can sign up here.

Another outlet, 1011now, put out a piece with other ways people can be helpful at this time. Per the site, Trinity Lutheran Church-Mo Synod has been established as a shelter for people with nowhere else to go. The house of worship is also accepting prepackaged food items, but noted, "We CANNOT accept home made food of any kind!!!"

In times of tragedy, it's difficult to sit back and watch it unfold without being able to contribute in any way. Fortunately, there are many organizations making it possible for people around the country to get involved.

More Like This
6 Takeaways From The White House’s First-Ever Parents Press Conference
5-Year-Old Boy Died In Hot Car As His Family Prepared For Sister's Birthday Party
Can You Light Fireworks In Your Backyard?
There's Now A Tampon Shortage... Because Baby Formula Wasn't Stressful Enough