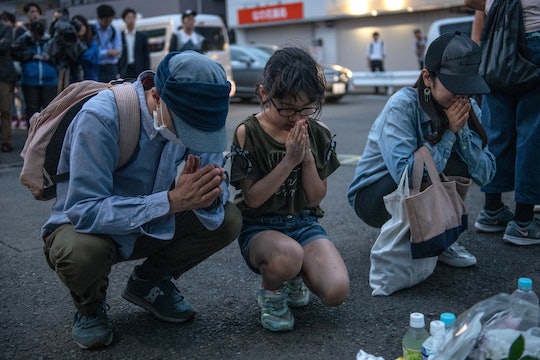 At least 18 people, including several schoolchildren, were injured in a tragic stabbing attack in Kawasaki, Japan, outside of Tokyo, on Tuesday. According to the BBC, two of the victims, including an 11-year-old girl, were reportedly killed in the attack. In the wake of this horrific and senseless act of violence — an unprecedented kind of violence in Japan — here's how you can help the Japan knife attack victims and their families as they work to recover from this tragedy.

The fatal incident unfolded earlier this morning, not far from a local park and a train station, the Associated Press reported. A man thought to be the attacker approached several school-aged children as they were waiting for a bus to take them to Caritas Elementary School, a private Catholic facility, according to The Washington Post. "I tried to stop him," a bus driver for the school reportedly told police, according to local news outlet, Kyodo News.

School officials and Japanese Prime Minister Shinzo Abe have since condemned the attack. According to the Associated Press, he said: "It was an extremely harrowing incident in which many small children were victimized, and I feel strong resentment... I will take all possible measures to protect the safety of children."

As the country and the victims' families work to heal from this tragic attack, there are a number of ways you can help from afar, but especially if you're currently in Japan.

More Like This
Chris Evans Has Choice Words For Critics Of The Same-Sex Kiss In 'Lightyear'
I Started a Magazine for Gay Parents in 1998. Here's What's Changed Since Then.
Viral TikTok Breaks Down How Beautifully Bluey Depicts One Character’s Infertility
Keep Talking To Your Kids About Abortion — It's More Important Than Ever