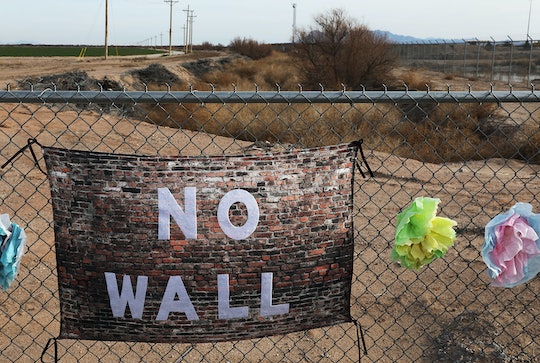 There was a time in our collective history when the accepted wisdom appeared to lead us to mind our own business. If we saw something that made us uncomfortable, something we knew deep in our bones was wrong, many of us were told to stay quiet. To stay in our own lane. To not stick our nose in. Of course, we now know that all this accomplished was a whole bunch of misery and horror and ill will throughout the planet. No more. Here's how to protest the detainment of children and families at the United States border, just like these unflinching Wayfair employees.

Romper has reached out to Wayfair and its associated companies, Joss & Main, AllModern, Birch Lane, and Perigold, for comment and is waiting for a reply.

So here's a little backup information just in case you didn't already know: In June 2018 the Trump administration began to separate children from their families at the southern border between the United States and Mexico as part of a "zero tolerance" immigration policy, as per Slate. These families were often seeking asylum in the United States, but instead they saw their children taken away from them and detained in border camps separately. The youngest reported child taken from his parents because of Trump's policy was just four months old, as reported by The New York Times.

Since then President Trump, under mounting pressure both within the United States and international criticism, signed an executive order to have these families reunited. A year later, here's where we are. There are still border camps where children are detained apart from their families. These facilities are called Border Patrol stations, which are mass detention centers like the one in McAllen, Texas, where it was recently reported by The Huffington Post that four toddlers are currently being kept and are considered "seriously ill."

So when Wayfair employees recently discovered that the Boston, Massachusetts-based company was selling beds to these border camps, they took matters into their own hands.

According to The Boston Globe, Wayfair employees recently found out that the online retailer had sold $200,000 worth of bedroom furniture to BCFS, a government contractor who has been managing the border camps. A total of 547 employees signed a letter to executive leadership voicing their concerns last week which read in part:

We believe that the current actions of the United States and their contractors at the Southern border do not represent an ethical business partnership Wayfair should choose to be a part of. At Wayfair, we believe that ‘everyone should live in a home that they love.’ Let’s stay true to that message by taking a stand against the reprehensible practice of separating families, which denies them any home at all.

Wayfair executives reportedly responded in a letter, as per The Globe, and confirmed they would be "fulfilling their order." The employees at the company's Back Bay office went on to stage a walkout to protest the company's alleged support of the border camps. On Tuesday the employees, who are banding together through the hashtag #wayfairwalkout, outlined their demands to the company.

The peaceful walkout has received praise from organizations like RAICES, a non-profit providing immigration legal services in Texas.

For anyone else who wants to protest the detainment of children and families at the U.S. border, there are a few things you can do.

These children and their families cannot be forgotten. And if Wayfair employees are willing to go so far as to protest the sale of beds... the least we can do is keep talking. Refuse to be silent.

Refuse to mind our own business.