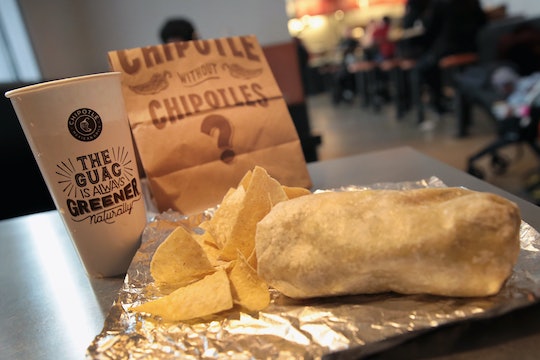 How To Get *FREE* Chipotle During The NBA Finals

What could be better than watching the NBA finals? Knowing that you could score some free food just for being a loyal basketball fan. So listen up freebie lovers, here's how to score free Chioptle during the NBA finals, which began on May 30. Even if you don't like sports, the Mexican food chain will be giving out up to one million dollars worth of free burritos during the games, according to ABC News. That's a lot of burritos!

Scoring a free burrito is easy. Anytime an announcer uses the word "free" (as in free agent, free throw, cut free, etc.), Chipotle will give away free burritos, according to a statement from the company on their website. When the "F" word is dropped, Chipotle will tweet a unique code from @chipotletweets. Fans should then text the code to 888222 to receive a digital coupon to be used for a free burrito — or any regular priced entree now through July 14, 2019.

The catch? The promotion is limited to 20 on-air mentions of the word "free" per game. That's still a lot of burritos.

However, there are some additional things to note. The word "free" does not count if it is used in a compound word like carefree, freestyle or freeway. Plus, only the principal play-by-play announcer, color commentator, or network sideline reporter saying "free' will kickstart the giveaway. Full rules and restrictions about the promotions can be found here.

"We know that basketball fans are some of the most passionate fans in sports, so we're putting even more, about one million dollars more, on the line by 'freeting' through these final games," Chris Brandt, Chief Marketing Officer of Chipotle, said in a statement. "Chipotle has never been easier to access and with Chipotle delivery, you never have to choose between basketball and burritos again."

If you miss your chance at a free burrito, Chipotle has one more sweet deal to offer you. Customers can score free delivery during the NBA Finals on orders $10 or over (up to $200) when purchased via the Chipotle app, Chipotle.com or Doordash, according to Food & Wine.

Chipotle isn't the only food chains serving up free grub during the game. Taco Bell is also joining in on the fun.

If any team wins a game on the road, essentially 'stealing' the game from the home team, Taco Bell will give away free Doritos Locos Tacos across the US on June 18, according to Business Insider.

Taco Bell's "Steal A Game, Steal A Taco" started back in 2016 when the Golden State Warriors "stole" Game 3 in Cleveland while playing against the Cavaliers.

Full rules and regulations for Taco Bell's promotion can be found here.

Who would have thought basketball could be this tasty? If more people knew they could get free food out of watching a sporting event from the comfort of their own couch, ratings for this year's NBA Finals might just skyrocket.

More Like This
This Is Not A Drill: TWIX Is Releasing A New Cookie Dough Flavor
This Is What Experts Say About Eating Hot Dogs During Pregnancy
Dunkin’s New Summer Menu Is Here At Last
Can The Baby Have That?