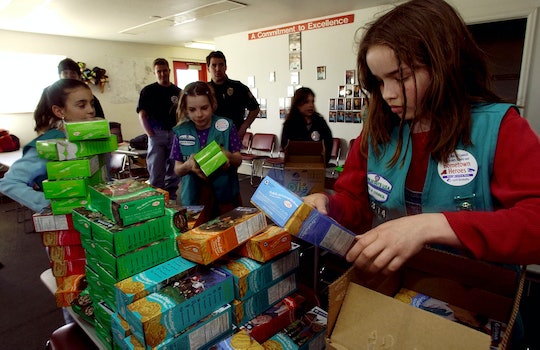 Here's An Easy Way To Let Our Troops Know You're Thinking Of Them: Girl Scout Cookies

To say 2020 has gotten off to a bumpy start is indeed a massive understatement. As the crisis in the Middle East continues to unfold, military families across the United States are being thrown into anxious and uncertain times. If you'd like to send a show of support to those being deployed, one small but sweet gesture could be to send our troops some Girl Scout Cookies.

At Fort Bragg, over 3000 soldiers have now been deployed to the Middle East. And some of the stories coming out of the military base are truly heart-wrenching. Thousands of families have been separated with little to no notice. CNN has reported on twin sisters bidding each other a last minute farewell, soon-to-be fathers leaving mere days before their children are born, and a wife who was unable to tell her husband goodbye, due to her need to be with their daughter during a medical procedure.

Military families of course know all too well that deployments can happen at any moment, but as the New York Times reported, the speed and frenzy of this recent deployment has been tremendously unsettling.

It's difficult to fathom what these families — especially the small children of troops — are going through. And unless you've been in the service yourself, it's impossible to imagine what the troops themselves are experiencing at this moment. I know sending a box of Thin Mints to a marine might feel ridiculously futile in light of the situation, but any show of support, however small, can be meaningful to servicemen and women, and to their families. Just check out this video of beaming troops holding up boxes of Do-si-dos if you don't believe me.

So how to actually get some shortbreads to Iraq? Well, there are a few different ways. If your local Girl Scout troop participates in a program called "Gift of Caring," you can simply check off on the form that you want your order sent to military stationed overseas. This can be done both at an in-person booth, or if you're placing a virtual order with a scout. The Girl Scouts then take care of shipping the cookies over for you. (If you're wondering how to track down some scouts selling cookies, you can search on their site, or with the Girl Scout Cookie Finder App.)

Or, you can send boxes of cookies directly to organizations that specifically work with sending care packages and shows of support to the military. Organizations like Any Soldier, Hugs for Soldiers, or Soldiers' Angels are ready to assist and get those treats directly into the hands of troops. These organizations will also pass along letters and other items, if you'd like to send something in addition to your boxes of Caramel deLites.

So send boxes of cookies. Send notes of encouragement. And maybe send a message to the government as well if — like so many Americans — you're distressed and angry by the recent turn of events. The easiest way to do this? Be sure to cast your ballot next November.

More Like This
Dunkin’s New Summer Menu Is Here At Last
*THE* Ice Cream Flavors Of The Summer
This Is What Experts Say About Eating Hot Dogs During Pregnancy
Can The Baby Have That?