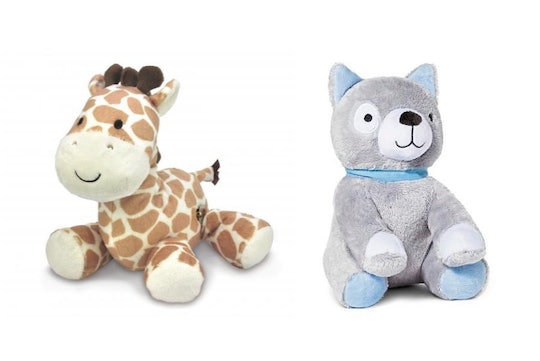 Nearly 600,000 Of These Wind-Up Musical Toys Were Recalled Due To A Choking Hazard

A show of hands for all the parents out there who have given their child a plush musical toy to soothe them? I certainly know that I have in the past. While there's generally nothing wrong with offering your child a plush toy, a whopping amount of Kids Preferred wind-up musical toys have been recalled. And parents everywhere are going to want to make sure their child's toy was not part of that recall, to be on the safe side.

The wind-up toys — which were sold at Target, Carter's, and Walmart, as well as other stores and online nationwide — have been recalled due to a potential choking hazard, according to the U.S. Consumer Product Safety Commission. The CPSC issued a recall notice which pointed out the hazardous nature of the toy:

The metal post and/or handle of the wind-up mechanism can detach, posing a choking hazard to young children.

Romper has reached out to Kids Preferred regarding the recall and is awaiting a reply.

As of Thursday, Kids Preferred — which is headquartered in New Jersey with offices in New York, Hong Kong, and Shanghai — had received a total of six reports of the wind-up handle parts coming loose, according to The Miami Herald, but thankfully no child has been reported injured as a result.

Nearly 600,000 Kids Preferred Waggy Musical Toys were involved in the voluntary recall. The toys were manufactured in 2016 and were sold under the brand names Carter's, Child Of Mine, Guess How Much I Love You, and Just One You.

To find out whether your child's toy was involved in the recall, check the model number and batch code sewn on the small white label behind the care instructions label. Once you have found the batch number, you can check it by visiting the website kidspreferred.com or simply click here.

There were several varieties of plush toys involved in the recall, in different colors and animals. According to the CPSC, the recalled toys include:

If you find out that your Kids Preferred wind-up musical toy has been involved in the recall, you need to discontinue use immediately. You should also keep the toy away from children and contact Kids Preferred for a replacement toy.

The company is not offering refunds for the toys, but will replace any recalled item even without the receipt. According to the Kids Preferred website:

We understand that on an item like this toy, you may not still have the receipt. The good news is YES, you can get a replacement without a receipt by providing the batch code numbers from the labeled product.

Be sure to have a close look at your kid's wind-up plush toys, because it's always better to be safe than sorry.

More Like This
Emma Thompson Shotputs A Child As Miss Trunchbull In The Matilda Musical Trailer
This Map Illustrates Just How Many States Would Ban Abortion If Roe V. Wade Is Overturned
Keep Talking To Your Kids About Abortion — It's More Important Than Ever
Obamas Issue Powerful Statements After Supreme Court Ends Roe v. Wade