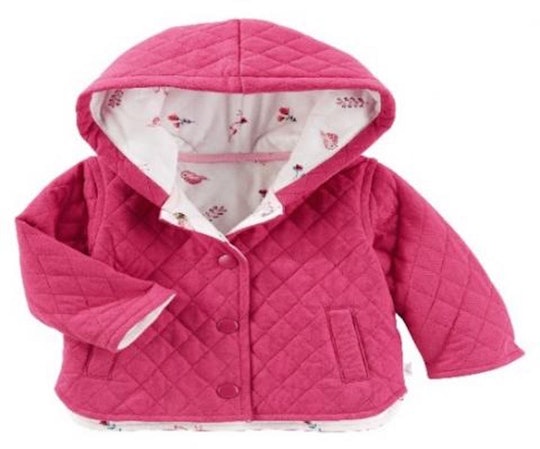 On Wednesday, OshKosh B'gosh Inc. recalled its Baby B'gosh quilted jackets in pink and gray due to a choking hazard, according to United States Consumer Product Safety Commission. Considering OshKosh is a very popular brand among parents, many people are wondering if their child's jacket is included in the recall. If you're one of the concerned parents, here's how to tell if your OshKosh Baby B'Gosh Jacket was recalled. OshKosh did not immediately respond to Romper’s request for additional comment.

Any recall involving children is scary, especially when it involves a choking hazard. What's even more frightening is that a lot of these choking hazards aren't always immediately noticeable or obvious, and this was the case for OshKosh's quilted jackets in pink and gray. According to WHNT, the brand recalled 38,000 jackets after it "received three reports of a snap detaching, including one report of a child putting a detached snap in her mouth." Obviously, a snap button can be a very serious choking hazard and buttons in general are often cited as one of the most common causes of choking in children.

The good news is that it's really simple to determine if your Baby B'gosh jacket is a choking hazard.

First off, if your jacket isn't pink or gray, rest assured that it isn't involved in the recall. The recall only includes pink and gray quilted jackets that were sold between August 2017 and September 2017, according to Click2Houston. The jackets were sold at the following stores: OshKosh, Bon-Ton, Kohl’s, and Fred Meyer, according to the CPSC. Online retailers also sold the jackets, including OshKosh's website.

If you don't remember when you bought your jacket (it's OK, I can barely remember what day it is), don't freak out. OshKosh provided a chart of style numbers and UPC codes included in the recall, and you can find your jacket's stye number and UPC code on its tags. The chart is available on many websites, including the CPSC. The recalled sizes run from 0-3M to 5T, according to Click2Houston.

If you cut out your jacket's tags, it's probably best to call OshKosh directly at 800-692-4674. Customer representatives are available Monday through Friday between 9 a.m. to 5:30 p.m. Eastern Standard Time, and you can also reach out to someone via OshKosh's website, according to NBC Connecticut. OshKosh should be able to tell you if your jacket was recalled based on its description and other identifiers.

Unfortunately, this recall is just one of the many recalls parents have witnessed in 2017. In October, there were two major recalls: CPSC recalled the Fisher-Price Infant Motion Seat due to a fire hazard and Diono recalled 500,000 of its car seats due to potential safety issues. If you don't want to miss any news of a recall, keep an eye on the CPSC's website — it regularly updates consumers.

It's also important to note that when a recall happens, parents should take action right away. Jennifer Toney, the founder of WeMakeitSafer.com, said of recalls, according to Parents:

It's really important they do something and not take the 'cross the fingers and hope it doesn't happen to you' approach.

Although recalls can be daunting and scary, there's usually nothing to worry about if you stay updated on all of the relevant information. If you have a recalled item, return it ASAP — it's not worth the risk to keep a potentially hazardous item around.