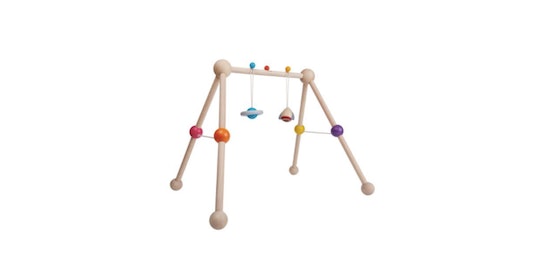 How many parents have happily used a baby gym to keep their little one entertained when life gets busy? I know I have. But it seems this might not be the safest thing to do with your baby, depending on which baby gym you have. In the wake of a recent list of recalls by the Consumer Product Safety Commission, parents are going to want to know how to tell if their PlanToys baby gym was recalled to be on the safe side.

The CPSC recalled the infant gyms — the type that are placed on the floor so a baby can lie down underneath and play with the dangling mobiles above — due to a potential strangulation hazard. It seems that there are side rope cross bars on the gym that could potentially strangle a baby. Fortunately there have been no reported incidents or injuries so far with the gyms. Romper has reached out to representatives for PlanToys for further comment on the recall and is awaiting a response.

About 500 of the gyms were sold in the United States by specialty toy and baby product stores, as well as being sold on Diapers.com, Target.com, and other websites between September 2016 through to May 2017.

The wooden baby gym is tan in color and has four legs, with four colored balls in the middle connected by rope. The mobiles dangling from the top of the gym look like space objects. The CSPC notes that the best way to identify these recalled baby gyms is to check the manufacturing date code — TH 080116 through TH 082916 — which can be found on the top corner joint connecting ball.

These gyms were manufactured in Thailand and sold by PlanToys Inc., a company based in Union City, California. Judith Culberson, national sales and marketing manager at PlanToys, told local ABC news affiliate WNEP that the gyms were initially passed for sale in Thailand, but the company retested the product in May and after closer inspection it issued its own recall. "People were very understanding. Everybody wanted it replaced," Culberson told the outlet.

Consumers who did purchase these gyms should immediately discontinue use of the product, and contact PlanToys for a free replacement. To contact PlanToys you can call the company toll-free at 866-517-7526 from 9 a.m. to 2 p.m. PT, Monday through Friday. Or you can send an email to Michael@plantoysinc.com. You can also learn more about the recall online at www.PlanToys.com and click on "Safety" at the bottom of the page.

When the PlanToys recall was announced, the CSPC also announced a much larger recall for Fisher-Price motion seats due to 36 reports of potential overheating, according to CNN. Approximately 63,000 seats were sold in the United States, and were sold between November 2015 through October 2017 at Target, Walmart, Toys "R" Us, and online at Amazon. The model numbers included:

Additionally, Smart Connect soothing seats with the model number CMR39 are also included in the recall. Consumers can contact Fisher-Price for a full refund.

While it's obviously concerning to learn that a product used by your little one has been recalled due to a safety hazard, it's also comforting to know that parents aren't the only ones looking out for their children's safety. In the case of PlanToys, not only did the CPSC step in to make sure these products were safe, but the company itself took measures on its own before the CSPC even stepped in. And that's a pretty solid endorsement of a company, in my books.

More Like This
10 Important Pool Safety Tips For Parents
Viral TikTok Breaks Down How Beautifully Bluey Depicts One Character’s Infertility
Keep Talking To Your Kids About Abortion — It's More Important Than Ever
This Map Illustrates Just How Many States Would Ban Abortion If Roe V. Wade Is Overturned