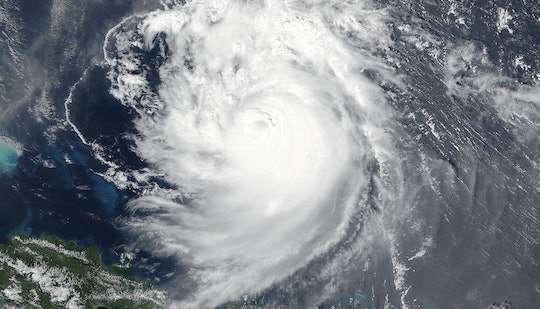 With Hurricane Irma downgraded to a tropical storm as it winds down over the southeast, yet another hurricane, Jose, is already chasing its heels. Meteorologists are keeping a close eye on it, and here's how you can track Hurricane Jose's path, too. You'll see that the National Hurricane Center issued what's known as the "hurricane cone" instead of one solid line. And Hurricane Irma provided a perfect example of why a hurricane cone is much more accurate to follow, given that Irma basically caught the west coast of Florida by surprise over the weekend.

As Irma ripped through the Caribbean, Jose became a named storm and has since weakened from a Category 4 storm to Category 2 as it trudged through the Atlantic. Thankfully, the already devastated islands of Barbuda, Saint Martin, and Anguilla missed the worst of Hurricane Jose, but that doesn't mean that the United States will. Forecasters haven't ruled out the possibility that Hurricane Jose's hurricane cone could swipe the eastern coast of the United States. But given how far out the storm is over the Atlantic, there's still a lot of uncertainty as to where Jose might make landfall.

But in the internet age, there are plenty of Hurricane Jose tracking resources out there to keep you covered. Here are some you can check out:

The NHC is the official government office for the NOAA, and it's not exactly the most glamorous weather website out there. That said, it is the clearinghouse for anything and everything related to hurricanes that could affect any part of the United States, on both the Atlantic and Pacific Coasts. During hurricane season, you can expect numerous updates about potential and active tropical cyclones.

The NHC's Hurricane Jose page is updated regularly and alerts are tweeted out on the NHC's Twitter account as well.

Looking for something a little bit sleeker? Stormpulse is a more modern website that shows real-time hurricane information across the entire top half of its website. Built as a platform for professional meteorologists, but it's totally approachable for the average person, too. Best of all, it's free.

If you need more mobile information on the go, then the American Red Cross Hurricane app is perfect for you. In addition to showing you updated hurricane tracking information, it also gives you various warnings, advisories, and other alerts in your area. If you're in an affected area, you can even use the app to tell other people you're safe. It's loaded with handy features and is free for both iOS and Google Android.

Love it or hate it, Reddit is pretty much unparalleled when it comes to real-time information tracking. Unlike Twitter, subreddits — the individual communities grouped by topic — give users a much more focused information tracking experience. (Personally, I have family in Florida who were impacted by Hurricane Irma, and I followed the Tropical Weather subreddit and its ongoing live thread for some of the most up-to-date information about what was happening on the ground.)

With this option, just popping "Jose" into their search bar will bring up anything and everything they have on the storm.

Given the historic nature of this year's hurricane season, it certainly couldn't hurt to track Hurricane Jose through several of these resources at once to make sure you and your family are prepared as possible.