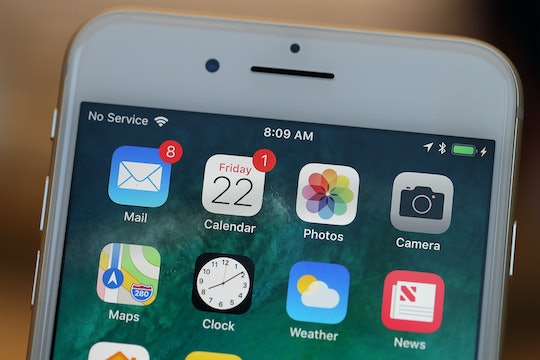 How To Turn On Emergency SOS In iOS 11, So You're Prepared If You're Ever In Trouble

As you've probably already heard, Apple's iOS 11 has had mixed reviews. Some love it for the added features, while others lament the serious battery drainage that came with them. But, there is one part of iOS 11 that everyone seems to agree is a good thing: the Emergency SOS feature, but how to turn it on varies, depending on what kind of phone you have.

Emergency SOS is a safety feature that allows iPhone users to discreetly call emergency services or a designated emergency contact if they feat that they are in danger. According to Business Insider, by pressing the power button five times in rapid succession, a swipe screen will appear. The user will then be prompted to power down the phone, call a Medical ID (the emergency contact), or call emergency services — in most regions of the United States, this option will default to 911.

According to the New York Daily News, while the Emergency SOS feature is activated, it will also turn off the Touch and Face ID, which will cause the phone to require a passcode before it can be opened. This requirement prevents anyone from opening the phone without the owner's consent.

Before this feature can be used, though, it must be set up ahead of time. As Emergency SOS is only available on the most recent version of iOS, the very first step is to update your phone. After that, to set it up, simply go to "Settings" on the intended phone, and scroll down the "Emergency SOS" in the third section down from the top. Toggle to activate the "Auto Call" function, and it is good to go.

The options for this feature don't end there, though. If you wish to have an emergency contact notified that you are receiving help, you will have to assign them in the Apple Health app. For the sake of convenience, this app can also be accessed within the Emergency SOS page. Anyone that you assign to that list will automatically be contacted if you use Emergency SOS to call for help. This could also be helpful in the event that a good Samaritan is helping you during an emergency, as they would be able to see who to notify of your condition or situation.

There is one additional option contained within the Emergency SOS setup: whether or not to activate the "Countdown Sound," a feature that, according to PopSugar, would play a warning sound to alert the user that an emergency call is about to be placed. This has both benefits and drawbacks, though. While it could be helpful to be warned if you are butt-dialing 911, it would also alert a potential attacker to your intentions — thus eliminating the discretion and secrecy that makes Emergency SOS so appealing.

As simple of as it is to use, Emergency SOS is turned on differently depending on what model of iPhone you have. According to iPhone Life, to make an Emergency SOS call on the iPhone 7 or earlier, you will first rapidly click the power button five times in a row. Then, the Emergency SOS slider will appear — slide it to contact emergency services. If you somehow accidentally activate Emergency SOS, tap "Stop" at the bottom of the screen and then "Stop Calling" to confirm the decision.

If you have an iPhone 8 or 8 Plus, iPhone Life explains that you will tap and hold the power button and one of the volume buttons at the same time. At that time, the Emergency SOS slider will appear and a countdown will follow. You can drag the slide and skip the countdown, or simply wait for the countdown to run out and the call will be placed automatically.

There are some concerns that the Emergency SOS feature will put domestic violence victims at greater risk, but overall it has been hailed as a great safety measure — for women in particular. Being aware of its existance and knowing how to make it work could prove lifesaving in the event of an emergency.

More Like This
Reddit Is Not Impressed With Dad Who Hid Neighbor's Gnome Because It Scared His Kid
Viral TikTok Breaks Down How Beautifully Bluey Depicts One Character’s Infertility
Keep Talking To Your Kids About Abortion — It's More Important Than Ever
This Map Illustrates Just How Many States Would Ban Abortion If Roe V. Wade Is Overturned