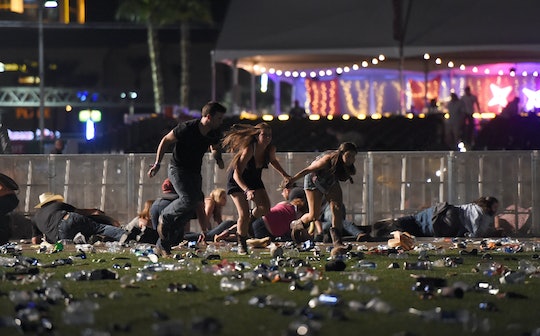 I Let My Kids Watch The News Monday. I'll Never Forget The Question They Asked

I wake up early Monday morning for prayers and check the news almost reflexively. A mass shooting in Las Vegas kills more than 50 innocent people and injures hundreds more. The news is devastating, but it’s almost time to wake my children, aged 11 and 8, for school. Anxiously, I put on CNN as they get ready.

Downstairs, the kids are surprised that I’ve broken the rule of no television during weekday breakfast. It always makes them late if they watch cartoons while they eat their cereal. But today it's not cartoons, and I’ve made an executive decision to let the children watch. My daughter, 8, is wide-eyed, trying to grapple with the numbers she reads on the screen. “Isn’t 50 a lot of people to die?” she asks. She’s still too young to know much about death, I think.

“Yes, it’s a very big number, Sweetie,” I reply. “A bad man took a bunch of guns and killed people at a music concert.”

And then it comes, The Question: 'It wasn’t a Muslim again, was it?'

“Why?” she’s so distraught that I wonder if I’ve made the right decision to show her the news this morning.

“’Cuz the guy’s mentally sick,” my son, three years older, says. He tries to act all grown up, as if the news doesn’t worry him, but he hasn’t bitten into the piece of bread he’s been holding up to his mouth for several minutes, so I know he is bothered by it.

“Who did it?” my daughter asks. And then it comes, The Question. “It wasn’t a Muslim again, was it?”

I sit down at the breakfast table and take a deep breath. I sigh, really, at my little American children worrying about facing their classmates in school after a mass shooting. So many times they’ve been at the receiving ends of taunts after a terrorist attack in France, Spain, England, or here at home. Making any child mull over such events when they could be thinking about homework or recess is unfair, yet that’s what they and so many like them deal with through every time a tragic event unfolds. “No, it wasn’t a Muslim this time,” I assure my daughter. “But it doesn’t matter, does it? Whoever the shooter is, what he did was very bad. God wouldn’t be happy with him no matter what religion he follows.”

When Sandy Hook happened, I didn’t want to send my son to school the next Monday. But we all frequent movie theaters and malls, we go to airports and theme parks...

The kids digest all this in silence. CNN is showing an interview of a man who escaped the shooting, and they take in his tears and shaky voice in awe. “Why was this person able to get all the guns?” my son asks. “It’s so stupid.”

I agree. I talk a little bit about gun control, and how so many times the same thing has happened because gun laws are lax. “Imagine if someone was sick and he wanted to hurt others, should he be able to get a gun?” I asked. Both my kids shake their heads. “Well, we need to work harder to keep guns away from those people.”

Good question. This morning, I don’t know the answers. We’ve been down this road so many times, and no matter who the attacker is, parents like myself only care about keeping their children safe. When Sandy Hook happened, I didn’t want to send my son to school the next Monday. But we all frequent movie theaters and malls, we go to airports and theme parks, and one day my kids will go to college. Perhaps they’ll want to visit a music festival like over 20,000 people did Sunday in Las Vegas. All I can do to keep my kids safe is teach them responsibility and pray for them, knowing it may not be enough.

On the way to school, I hug my children. My daughter clings to me. “What if anyone bothers me today?” she asks. My son, who was called "terrorist" at his last school, has a tough look on his face, as if he couldn’t care less. But I know what both my children are feeling right now. It’s very much reflected in my own heart.

More Like This
I'll Be First In Line To Vaccinate My Kids, But I'll Never Forget That We Were Last
The Euphoric Terror Of Rollerskating Was Exactly What I Needed
How My Neurodivergent Son Taught Me To Move Through Life In A Wholly Different Way
Jenny Slate Played Our Parenting Edition Of Never Have I Ever & Here’s What We Learned