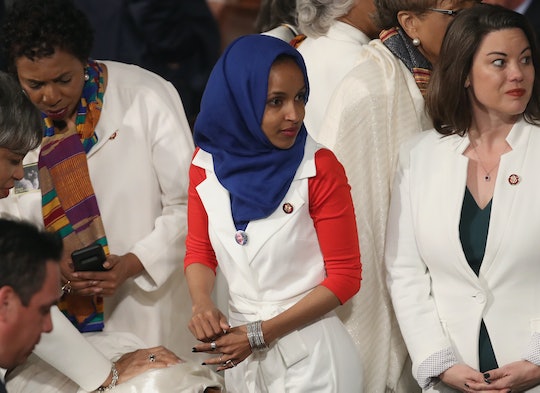 If anyone out there was hoping that President Trump would take the high road during his second State of the Union, think again. After a hearty round of bragging about the economy (fact-checking most certainly to follow), he got down to business. Focused on the subject that has become his own personal obsession; the border wall and immigration. His comments were... upsetting, to say the least. And Ilhan Omar's reaction to Trump's immigration comments at the State of the Union were especially poignant.

Omar is the newly-elected Democratic representative from Minnesota. She is also a Somali-American, who came to this country as an immigrant with her family after spending four years in a Kenyan refugee camp. She knows more than most about the struggle to pick up and leave your country in the hopes of finding a better life, a safer life, on the other side of the American border. Which is, perhaps, why she brought as her guest to the State of the Union Liberian immigrant Linda Clark from Minnesota. A woman who, as Omar said in a statement, per The Hill, "is exactly the type of American success story we should celebrate. Someone who came to this country seeking a better life, played by the rules, and built a life for herself."

So you can understand her despair when Trump made his feelings about immigration clear.

On Tuesday night, Trump continued his fear mongering in an effort to get funding for his wall, saying as per Vox:

Just yesterday, an MS-13 gang member was taken into custody for a fatal shooting on a subway platform in New York City. We are removing these gang members by the thousands, but until we secure our border they’re going to keep streaming back in.

Year after year, countless Americans are murdered by criminal illegal aliens. I’ve gotten to know many wonderful Angel Moms, and Dads, and families – no one should ever have to suffer the horrible heartache that they have had to endure.

As he spoke of immigrants as dangerous, as gang members, as essentially unwanted, Omar sat in the audience. And her reaction was clearly emotional.

It's difficult to tell whether or not the mother of one is praying, or trying to compose herself, or crying. But in the wake of Trump's comments on immigration, one thing was abundantly clear; Omar was not here for any of it.

As the country moves forward after Trump's incendiary speech, I think it's important to look to people like Omar. Leaders who look at the world through a different lens. Who aren't afraid to call President Trump out on his ill-formed attitudes about immigration. Who will hear something wrong and frightening and take a moment to absorb it. To realize the depth of what she's hearing, what it could mean. Compose herself... and soldier on.

Omar might be relatively new to the political stage, but she has a core of strength that could well come from her years as a young immigrant.

Perhaps Trump should consider that.