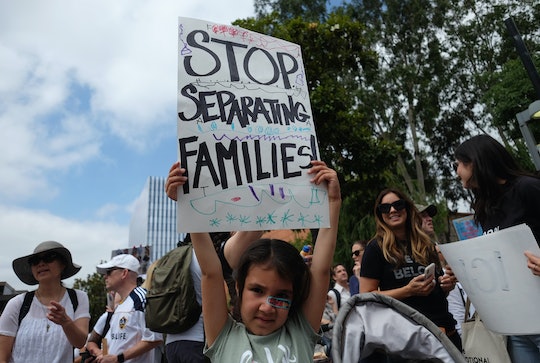 Ever since the Trump administration enacted its "zero-tolerance" immigration policy in May 2018, a number of disturbing stories have emerged about the reunification process between parents and their kids, including a new report alleging that immigrant children were left in vans overnight as they waited to be reunited with their families. In some cases, the children allegedly sat in the vans for at least 23 hours, as NBC News reported Monday.

On July 15, 2018, a group of children between 5 and 12 years old in the custody of the U.S. Department of Health and Human Services (HHS) were transported from Harlingen, Texas, to Los Fresnos, Texas, a town at the U.S-Mexico border, with the goal of reuniting them with their families, as NBC News reported.

The July trip took place just one month after President Donald Trump signed an executive order to end the family separations policy put forth by former Attorney General Jeff Sessions, according to NPR.

But instead of being processed and reunited with their loved ones in a timely manner, the group of children allegedly waited in vans, in some cases for up to 39 hours, due to supposed disorganization between ICE and HHS, according to the NBC News report.

After arriving at 2:30 p.m. local time, one of the regional directors for BCFS Heath and Human Services, the organization in charge of transporting the children, reportedly sent an email at 10:30 p.m. to their CEO, expressing concern about the situation.

As the delay continued, BCFS staff members hurriedly assembled blankets and food for the stranded kids, who were forced to sleep in the vans overnight, according to Slate.

NBC News constructed a timeline of the concerning events, noting that "at 1:30 a.m. Sunday, 11 hours after arrival, the first child was reunified," followed by 17 more children by 6:30 a.m. on Monday. By 1:30 p.m that same day, 32 children were reunited with their parents, while the last child allegedly had to wait until 5:50 a.m. on Tuesday for reunification, NBC News reported.

In response to NBC News' report, U.S. Immigration and Customs Enforcement (ICE) shared a statement with Romper that was first released in July 2018, stating that the children were in HHS custody, saying:

DHS and HHS are working tirelessly to reunite parents and children within the court ordered timeline. To do so requires large scale transfers of minors to ICE custody and both agencies have been actively engaged in managing the logistical challenges these large-scale transfers present. In order to facilitate more efficient reunification of family units going forward, ICE has leveraged additional resources to enhance processing capacity for adults/parents held in the Port Isabel Detention Center (PIDC). The safety and well-being of children remains our top priority as we work to comply with the court’s order as expeditiously as possible.

The July 2018 statement continued, "Absent extenuating circumstances, on average, most children brought to PIDC for transfer to DHS custody by HHS are reunified with their parents within a few hours of their arrival."

HHS did not immediately return Romper's request for comment.

NBC News' report is concerning for many reasons, but especially because no child deserves to be treated in an inhumane manner, as the report alleged. This kind of alleged treatment only furthers the trauma separated children already face, a topic that has been discussed by numerous health experts in the past.

“It’s an extreme form of violation of children’s human rights. I’ve worked in this field now for over 25 years, and I think this is the most extreme government-propelled harm against innocent children in the migration field that I’ve seen," Jacqueline Bhabha, professor of the practice of health and human rights at Harvard Chan School’s FXB Center for Health and Human Rights said in June 2018 about family separations, according to the Harvard T.H. Chan of School of Public Health.

This exact issue concerning disorganization with family reunifications was highlighted in an October 2018 report, in which the acting inspector general at the time, John Kelly, alleged that the Trump administration was "not fully prepared to implement the Administration's Zero Tolerance Policy or to deal with some of its after-effects," according to MSNBC.

The alleged chaos was demonstrated once again in April, when federal officials revealed that it could take two years to identify thousands of immigrant children who were separated from their families at the U.S.-Mexico border before Trump's executive order went into effect, according to The New York Times.

Although these aforementioned topics can be difficult to think about, it's important that advocates and other stakeholders continue to address the alleged mishandlings of the U.S. government concerning family separations.