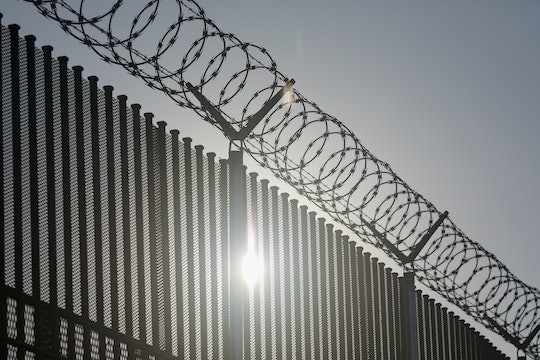 Following the news of a 24-year-old immigrant woman going into premature labor and delivering a stillborn baby while in custody at an Immigration and Customs Enforcement (ICE) detention center, immigrants' rights advocates are demanding action and a thorough investigation into the treatment of detained pregnant women.

The unidentified woman, according to The Washington Post, is from Honduras and was six months pregnant at the time of her arrest in Hidalgo, Texas, on Feb. 18, and was later taken to a detention center. Three days later, on Feb. 21, as officials from ICE and U.S. Customs and Border Protection (CBP), said in a joint statement to Romper that the woman had been taken to a hospital where she received two medical screenings; she was later cleared for release.

On Feb. 22, the woman was transferred to ICE custody to be processed for release, officials said. Later that evening, according to the agencies' statement, she "began complaining of abdominal discomfort" and was examined by the ICE Health Service Corps.

"The clinical director was called and ordered that she be sent to the hospital. EMS was called. At that time, she conveyed that the baby was coming. She went into premature labor, at 27 weeks pregnant, and delivered an unresponsive male infant," ICE and CBP said in their joint statement.

ICE and CBP said that "for investigative and reporting purposes, a stillbirth is not considered an in-custody death," but that officials are "disclosing the details of this tragic event to be transparent with Congress, the media and the public." The woman currently remains in ICE custody until she receives medical clearance.

Immigrants' rights advocates have quickly spoken out and expressed their concerns.

Kristin Rowe-Finkbeiner, the executive director and CEO of MomsRising, told Romper in a statement that "detention centers are not prepared to provide the health care pregnant women need — especially pregnant women who are being held in unsafe, dreadful conditions and facing uncertainly about their futures."

"The young woman who prematurely delivered a stillborn while being detained at an ICE detention center is likely one more casualty of the Trump administration’s breathtakingly cruel immigration policies," Rowe-Finkbeiner said. "The moms of our nation are broken hearted."

Rowe-Finkbeiner expressed concern about the Trump administration's decision to end an Obama-era policy that "presumed release of pregnant women and youth in immigration detention." The Washington Post reported in March 2018 that since the policy went into effect, 506 pregnant women had been in ICE custody, "but most are no longer detained," though it's not clear if they had been deported or released.

Victoria López, a senior staff attorney at the ACLU National Prison Project, told Romper by email that further investigation into what happened is warranted, but that more action is required. "More broadly, DHS should revise its policy allowing the detention of pregnant women as there is a significant risk to their health as demonstrated in recent cases," Lopez said. "In any case where a pregnant woman is detained, CBP and ICE should be required to publicly report information about the detention and treatment of those women."

Catherine Tactaquin, the executive director of the National Network for Immigrant and Refugee Rights, also called for an investigation, but went further, telling Romper in a statement that using detention as a way to punish or deter migrants and asylum seekers should end.

"Recent deaths of children and adults in detention, reports of sexual abuse of detained minors, and now this stillborn child, add to concern about the use and conditions of detention for migrants, asylum seekers, men, women and children," Tactaquin said. "It's time to end this inhumane and punitive policy and practice."

The American College of Obstetricians and Gynecologists (ACOG) could not comment on this specific case, but the group issued a statement over the summer, in June 2018, that said it "strongly opposes immigration practices that are detrimental to women and children’s health."

In the June statement, the ACOG said, it's been "well documented that women, especially pregnant women, held in immigration detention facilities have poor access to medical care, which can lead to detrimental health outcomes, including premature death. Immigrant women and girls should have access to adequate, timely, and evidence-based health care."

Although officials decided to be transparent with this distressing incident, those advocating for immigrants are still very much concerned about what's happening under the Trump administration's "zero-tolerance" immigration policy. Though there is no one known cause, the Centers for Disease Control and Prevention states there are several factors that could increase the risk for a stillbirth, such as smoking and the woman's race. And research from the American Journal of Epidemiology has shown that stress — whether it be financial, emotional, or personal, according to HuffPost — could also be a factor. With all this said, it's apparent why an investigation into what happened, as advocates are urging for, is important.