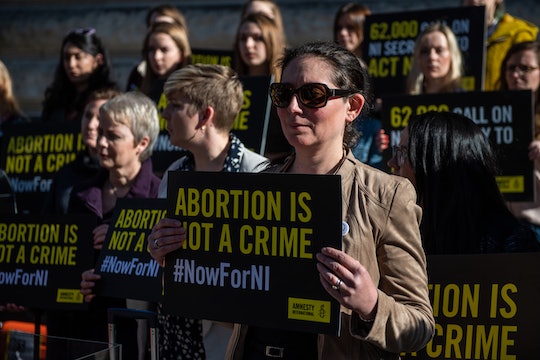 Abortion Is Legal In All 50 States Right Now, But Reproductive Rights Are At Risk

Abortion has long been a divisive issue in the United States. And recently, some states have been ramping up their fight over restrictive and dangerous legislation that would criminalize the medical procedure and make it much more difficult for women to access abortion care. For instance, Alabama’s near-total abortion ban, which made its way to the governor’s desk just yesterday, is the latest and one of the strictest permutations of this legislation sweeping the nation. With all that's been happening, many may be wondering if abortion is still legal in all 50 states across the country.

While abortion is, in fact, still legal in all 50 states, according to The Guardian, recent legislation and some existing state laws have made it increasingly difficult for women to access the safe and common procedure.

Among these is the "heartbeat bill" that would restrict abortion to the first six weeks of pregnancy, according to CNN, which is around the time a fetal heartbeat can be detected and is also before many women even know they are pregnant. In this year alone, permutations of this legislation have introduced in several states including Kentucky, Mississippi, Georgia, and Ohio, which was signed into law on April 11, according to TIME. At least 11 other states have introduced similar legislation, according to Rewire's legislative tracker.

Just last night, Alabama’s governor was presented with one of the most restrictive bans on abortion the nation has seen after it was passed in the state Senate. First introduced into the state House in early April, the legislation, if signed, could punish doctors who perform abortions with essentially life in prison and would only allow women to have the procedure done “to avoid a serious health risk to the unborn child’s mother” and if the “unborn child has a lethal fetal anomaly.”

In stark contrast to other legislations of its kind, this law would not make exceptions for women who are impregnated as a result of rape or incest, according to CNN, despite Democrats' requests for such exceptions to be included.

Many see these states’ efforts to ban abortion on a local level as a stab at bringing Roe v. Wade to the Supreme Court once again. American Civil Rights Union of Alabama Executive Director Randall Marshall told CNN, “There are already 14 cases nationwide in the pipeline, two of which are currently at the Supreme Court of the United States.”

It’s not just the states that are attempting to ban or greatly restrict access to abortion, however. This past January, the 116th Congress introduced H.R. 490, which is the federal version of the states’ heartbeat bills. The proposed legislation, authored by Rep. Steve King, would make it a federal crime for a physician to knowingly perform an abortion after detection of a fetal heartbeat or without first determining whether or not the fetus has a detectable heartbeat.

While Democrats in Congress will most likely upend any proposed abortion bans on a federal level, a Supreme Court hearing on the state bans are more likely. And many organizations, such as the ACLU and NARAL, are already taking legal action against more locally driven legislation, as CBS News reported.

However, with Justice Brett Kavanaugh on the Supreme Court bench, Roe v. Wade is more in danger now than ever before. In the past, the latest Supreme Court addition has previously signaled that, if given the chance, he would personally vote to overturn the precedent previously set forth by the bench. Last year, in a speech to the American Enterprise Institute, Kavanaugh praised and defended then-Associate Justice William Rehnquist’s dissent against Roe:

It’s fair to say that Justice Rehnquist was not successful in convincing a majority of the justices in the context of abortion either on Roe itself or in the later cases such as Casey, in the latter case perhaps because of stare decisis... But he was successful in stemming the general tide of free willing judicial creation of unenumerated rights that were not rooted in the nation’s history and tradition.

As abortion becomes increasingly difficult to access for many women in the states that have passed anti-abortion bills, eyes turn to the Supreme Court for a national discussion on the divisive issue.

If you are a woman seeking abortion care, but aren't sure how, you can contact your local Planned Parenthood for help. Many health care professionals are also taking to social media to provide tips for those seeking abortion.

While abortion is technically still legal in all 50 states, a heated political climate surrounding the issue and increasingly concerning legislation is prompting pushback from many. If you'd like to help protect reproductive rights and a woman's right to choose, here's where you can start.