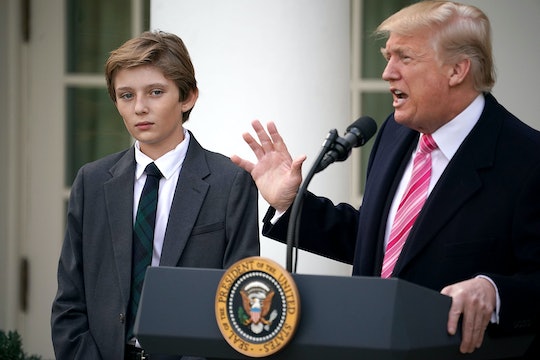 Following a delay thanks to the government shutdown, President Donald Trump finally delivered his State of The Union address on Tuesday, Feb. 5. Similarly to previous years, Trump was surrounded by a large audience comprised of his Cabinet members, Congress, and some of his loved ones as he gave the annual speech. And if you're wondering whether Barron Trump was at the State of the Union, the answer is no.

Barron, 12, doesn't always attend his father's public events. In 2018, for instance, he skipped the State of the Union address altogether. "All of the president's children and the first lady will be at the State of the Union with the exclusion of Barron," Press Secretary Sarah Huckabee Sanders said during a press conference prior to the event.

Considering Barron didn't attend last year's address, it's not too much of a surprise that he didn't attend the 2019 speech. Trump probably didn't mind his absence, given that many of his other family members were in the audience. First lady Melania Trump, Ivanka Trump, and Jared Kushner all attended the event, to name a few faces.

As for why Barron didn't attend this year's festivities? There are few possibilities. For starters, the event — which started at 9 p.m. ET on Tuesday — is a long night for someone who probably has to wake up early for school in the morning.

Another thing to consider? A little thing called privacy. The White House has mentioned Barron's need for privacy before, reminding the press in January 2017 about the “longstanding tradition that the children of Presidents are afforded the opportunity to grow up outside of the political spotlight," according to Politico.

Given the emphasis on Barron's privacy, he's typically left out of public events or photo-ops. Barron wasn't featured in the White House's 2017 and 2018 Christmas cards, for instance.

There are rare moments, however, when Trump and the First Lady do discuss Barron publicly. Most recently, Trump discussed the possibility of Barron playing professional football one day. The president, who isn't thrilled with the idea, revealed to CBS's Margaret Brennan on Sunday:

So, you know I — I hate to say it because I love to watch football. I think the NFL is a great product, but I really think that as far as my son — well, I've heard NFL players saying they wouldn't let their sons play football. So it's not totally unique, but I — I would have a hard time with it.

Trump also revealed during the interview that Barron is particularly interested in soccer these days, which is a sweet detail.

Of course, it's possible Barron will become more of a public figure as time goes on. The middle schooler will turn 13 on March 20, which is just around the corner, and he'll be 14 by the time his dad's first term as president comes to a close.

Who knows, maybe Barron will make an appearance at Trump's last State of the Union address for sentimental reasons. I guess the public will have to wait and see what happens.