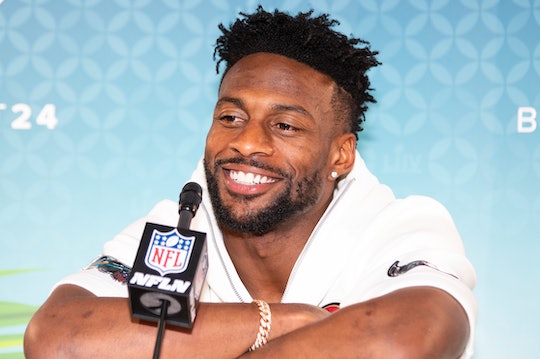 NFL Star Emmanuel Sanders Has Been Off The Market For Years

Emmanuel Sanders is a talented wide receiver for the San Francisco 49ers and a beloved NFL star, but what is he like off the football field? For starters, Emmanuel Sanders has been married to his wife Gabriella for several years now and the two share some adorable kids together, who will surely be cheering their dad on from the sidelines this Sunday at Super Bowl LIV.

Sanders and his wife Gabriella have been married since 2013, or as Sanders told Sports Illustrated, "going on 10 years". Together, they have two super cute kids, their 5-year-old son Princeton and 3-year-old daughter Zoie. Over the years, the two have experienced a number of a highs and lows together; in 2016, Gabriella filed for divorce, according to TMZ, but has since called it off.

Gabriella's Instagram account is filled with happy photos of her adorable little family as well as photos of her very stylish outfits. Many of her photos features a designer, (sometimes multiple designers) and she even matches her kids outfits to her own. Which makes sense, since according to Gabriella's Instagram bio, she is a stylist and fashion designer for her children's clothing line, Kid Kong NYC. (The website for the online store is currently under construction.)

Looking at photos from her Instagram account, it's clear that Gabriella knows fashion. Just look at her kids' matching Fendi outfits (in the colors of their dad's team) when they went to cheer him on at the NFC Championship game.

And while Gabriella is married to a very famous NFL player and is undoubtedly his biggest supporter, she explained to Wags Redefined in 2017 that it can be a struggle to prioritize her identity. "It's hard to work because we find ourselves in random states we wouldn't be in if it weren't in support of our significant others," she said. "You always seem to find yourself in the passenger seat as you help your husband build his name and brand, but somewhere in between there you can help yourself as well and take advantage of your situation. The wave was made for both of y'all to ride."

Even so, Gabriella seems to have fully embraced her role as a mom and NFL wife. Truly, judging by her Instagram account, she is one of her husband's biggest supporters and will be surely there on the sidelines cheering him on as he attempts to win Super Bowl LIV.