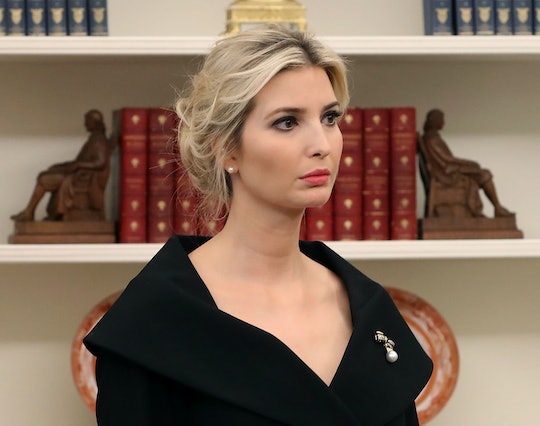 Well, the day has finally arrived. (No, not Taco Tuesday — although, go for it if that's your thing.) On Tuesday, Feb. 5, President Donald Trump delivered his State of the Union Address. As the president began his speech, some viewers might be wondering: Is Ivanka Trump at the State of the Union?

This annual speech from the president to the public kicked off in front of a joint session of Congress. Aside from Congress members, Supreme Court justices were in attendance, as well as the Joint Chiefs of Staff, invited guests of Congress members, and more. Given the fact that Ivanka is a First Daughter and a member of Trump's administration, it was pretty much expected she would be in attendance on Tuesday night. Not to mention, she was present during her father's first State of the Union Address on Jan. 30, 2018, NBC News reported — along with the majority of Trump's other children: Donald Trump, Jr., Eric Trump, and Tiffany Trump. (Barron did not attend in 2018.)

But did Ivanka actually make it this year? It didn't take long for cameras to find Ivanka and her husband, Jared Kushner, in the crowd ahead of her father's second State of the Union Address on Tuesday.

Viewers might be more interested in Ivanka today than usual — considering she made Tuesday's headlines for a completely different reason. That's thanks to an art exhibit of an Ivanka look-alike wearing stilettos while vacuuming breadcrumbs. (People viewing the piece can actually toss breadcrumbs at her from a pile.) Artist Jennifer Rubell is behind "Ivanka Vacuuming," which is on display at Flashpoint Gallery in Washington, D.C. until Feb. 17, according to HuffPost.

"Inspired by a figure whose public persona incorporates an almost comically wide range of feminine identities — daughter, wife, mother, sister, model, working woman, blonde — Ivanka Vacuuming is simultaneously a visual celebration of a contemporary feminine icon; a portrait of our own relationship to that figure; and a questioning of our complicity in her role-playing,” the exhibit's website reads.

It didn't take long for Ivanka to chime in about the piece and what it was implying. "Women can choose to knock each other down or build each other up. I choose the latter," she tweeted on Tuesday morning, sharing an article about the look-alike exhibit from The Hill.

It was a bit touch and go there for a while as to whether the address would even go down — considering the longest government shutdown in U.S. history and all. Originally, the SOTU was slated for Jan. 29. However, President Trump was forced to postpone the speech because of the 35-day shutdown over funding for "the wall" at the southern border, according to USA Today. The government was temporarily re-opened through Feb. 15 — so the big show was able to be rescheduled for early February.

So yes — Ivanka Trump was most certainly at the State of the Union address on Feb. 5. And if she was still reeling from the art exhibit news earlier on Tuesday morning, she didn't let it on.