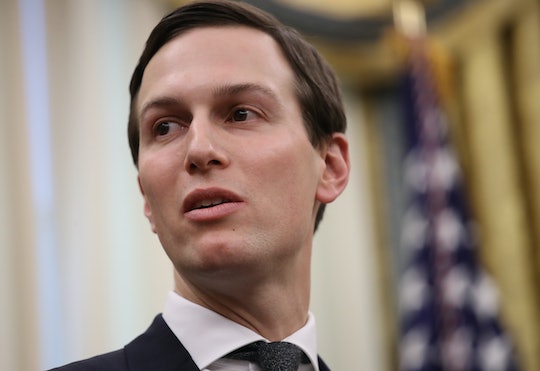 After being postponed because of the 35-day government shutdown, the State of the Union address is on once again. On Tuesday, Feb. 5, President Donald Trump took the podium and delivered his second SOTU address as President of the United States. A joint session of Congress, their guests, advisors to the president, and more esteemed individuals looked on as the live broadcast went down. While cameras periodically scanned the audience, plenty of viewers likely wondered: Is Jared Kushner at the State of the Union?

As many will remember, the original Jan. 29 date for Trump's second State of the Union address was a no-go, thanks to the government shutdown. The 35-day standoff was the longest in history and hinged on Trump securing billions of dollars in funding for "the wall" along the United States-Mexico border, according to USA Today. Since the government has temporarily re-opened until Feb. 15, Trump was able to re-schedule his annual address for Feb. 5.

So was the first son-in-law physically in attendance on Tuesday night?Jared Kushner — who is married to Donald Trump's eldest daughter, Ivanka Trump — is both a son-in-law of and a senior advisor to the president. So you'd think he'd at the top of the list of individuals invited to the annual event. I mean, Kushner has been there since the very beginning to support his father-in-law: On the campaign trail, at the inauguration, and pretty much every day since.

He was also at last year's address alongside Ivanka and the most of Donald Trump's other children — including Donald Trump, Jr., Eric Trump, Tiffany Trump. (His youngest son with First Lady Melania Trump, Barron, sat out last year's event.) Which is why it came is no surprise that Kushner was indeed spotted at the State of the Union address with his wife, Ivanka.

Although Kushner regularly makes public appearances alongside Ivanka or with the POTUS, he's not much of a public speaker. And it isn't clear, exactly, what political expertise he brings to the table in relation to his senior advisor role. However, it seems as if the first son-in-law has been especially busy lately. That's because President Trump and Kushner apparently met sometime last week with contractors about building the border wall, CNN reported on Tuesday. Trump met again with contractors at the White House on Monday, ahead of the State of the Union address, according to the news outlet.

In other recent Jared Kushner news, CNBC reported in late January that the senior adviser had his application for top secret clearance rejected by two longtime White House security specialists after an FBI background check raised concerns. According to CNBC, they had reportedly been worried about the possibility of foreign influence on him, but the security specialists' supervisor overruled this recommendation and approved Kushner's clearance anyway.

Considering Jared Kushner is a senior adviser to the president, the first son-in-law, is allowed to be in on reported talks with contractors about "the wall," and is apparently getting top secret security clearance — of course he was at the State of the Union address on Tuesday.