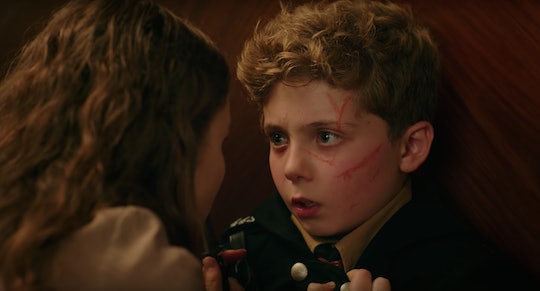 'Jojo Rabbit' Stars A Breakout Child Actor, But The Film Isn't For Little Ones

I love a good satire as much as the next gal, but whether or not I'd watch them all with my little one is another story. Especially when the story takes on something as heavy as Nazism, it's worth thinking through if Jojo Rabbit is appropriate for kids. The Oscar-nominated film is rated PG-13 and may contain content that some parents would deem inappropriate for their children to watch.

Jojo Rabbit, which is nominated for a whopping 12 Oscars, follows lonely 10-year-old Johannes "Jojo Rabbit" Betzler, as he navigates to complicated world of Hitler's Germany. While he's made friends with an imaginary führer, his mom is hiding a Jewish girl in the attic and put Jojo in something of a compromising position. The lad struggles to rectify his beliefs with a growing fondness for the girl upstairs. All in all, it sounds like a pretty interesting story. But there are certain aspects of the film that should give parents pause.

Among those most disturbing scenes, Common Sense Media lists on-screen depictions of maimed soldiers, dead bodies hanging from posts, children carrying and using machine guns, and the hanging bodies of people executed by Nazis. A likable character is killed suddenly and tragically, adding a layer of seriousness to the comedic satire that may prove too much for kids. There are also orphaned children, the killing of animals, cursing, and upsetting hate speech about Jewish people and other enemies of the Nazi regime.

While the film is pretty clearly meant to highlight the injustices done to Hitler's victims, the lighthearted and potentially sympathetic Hitler character may prove to be too confusing for children just learning about WWII Germany. An understanding of the imaginary friend's real-life counterpart could help to mitigate any sympathy towards him that the movie creates.

As with any film of complicated nature, speaking with older children about the differences between fact and fiction in dramatic interpretation can be helpful. Jojo Rabbit could be a jumping off point for important conversations between parents and children about the atrocities committed in Hitler's name. Ultimately, it would be wise to have a look at the film on your own before deciding if your children are ready for all that it includes.

More Like This
Why ‘Lightyear’ Is Banned In Several Countries — And Why You Should 100% Still See It
Take A Sneak Peek At Brand New Daniel Tiger's Neighborhood Movie
10 Of The Raddest Movies From The '90s To Watch On Girls Night
Kristen Bell Just Hinted That 'Frozen 3' Is Maybe (Hopefully!) In The Works