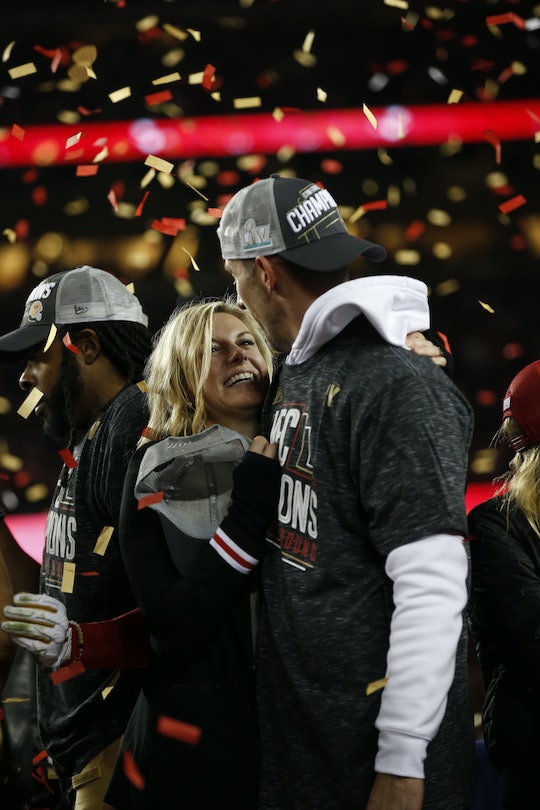 Super Bowl 54 will pit the San Francisco 49ers against the Kansas City Chiefs at Hard Rock Stadium in Miami, Florida, later today. And while the effort of the players on the field will play a large role in determining which team walks away champions, they're not the only ones working toward a win. On the sidelines of today's game, for example, you'll likely notice San Francisco 49ers head coach Kyle Shanahan. And if you're wondering if he's married, the answer is yes, and happily so it seems.

Shanahan married his wife Mandy in 2005, according to SFGate. However, the pair's history stretches back much farther than their 15-year marriage. According to SFGate, Shanahan and Mandy first met while students at Cherry Creek High in Colorado and dated briefly the summer after Mandy, who was a year behind Shanahan, graduated.

Despite breaking up when they headed off to different colleges, the two remained close friends. The pair became especially close when Mandy was in her junior year of college and learned her mother had been diagnosed with Stage 4 gallbladder cancer, according to the San Francisco Chronicle.

Mandy told SFGate that Shanahan became an unexpected source of strength and support for her and her family, writing letters to her mom and visiting on weekends. "He completely stunned me," she told the news outlet. "Kyle, hands down, got me through that. After going through that with him, I couldn’t imagine being with anyone else."

Since marrying in 2005, the couple have had three children together: Stella, 11, Carter, 9, and Lexi, 6. And here's a fun fact, former Buckaneers quarterback Chris Simms claimed on a Bleacher Reporter podcast that Shanahan's son Carter is named after rapper Lil Wayne, whose birth name is Dwayne Michael Carter Jr. Though he hasn't confirmed if that's true, Lil Wayne did send Shanahan's son a signed poster and copy of The Carter III back in 2018, ESPN reported.

While Shanahan will be working hard along the sidelines of today's Super Bowl to bring San Francisco home a championship, Mandy will more than likely be cheering from the stands. In fact, according to Shanahan, Mandy is one of the 49ers' biggest fans and careful about doing whatever it takes to ensure the team has good luck.

Earlier this month Shanahan told the San Francisco Chronicle that he'd been thinking of switching out his signature cherry red, flat-billed baseball cap ahead of the Super Bowl. "I liked it, but I wanted to change," he told the paper. "And I told my wife I was going to do that, and she freaked out on me. She tells me that was the reason we're winning. I know it’s not, but if I don’t wear the hat and we lose, I’ll have to deal with that forever. I’ll finish it out this year, there’s only one game left."

Fans can tune in to FOX tonight to see if Mandy is right and Shanahan's red hat proves lucky for the 49ers.