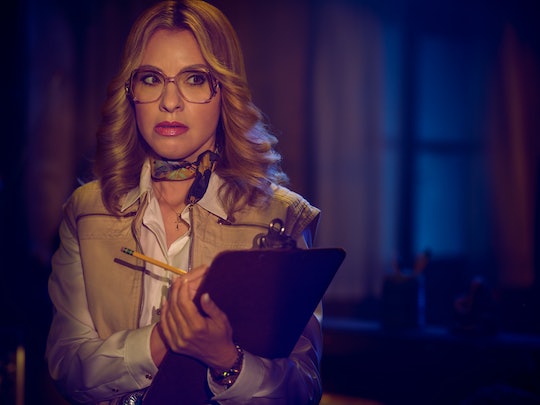 Fans Believe Margaret Has A Dark Secret On 'AHS: 1984'

Margaret Booth sets off alarms almost as soon as she's introduced on American Horror Story: 1984. There's something immediately suspicious about her, and I'm not just talking about her eerily immovable Farrah Fawcett hair. Her story of surviving serial killer Mr. Jingles doesn't add up, which is what led many viewers to theorize that Margaret is the killer on AHS: 1984. There's definitely more going on with her than there seems.

Margaret was the one who chose to re-open Camp Redwood despite its bloody history, because she was part of that history. She wanted to reclaim the territory where she had suffered so badly: when Mr. Jingles massacred campers in the 1970s, Margaret managed to make it through alive, though she lost an ear in the process. It seems noble, even admirable; she's a survivor. But it also doesn't quite ring true.

Margaret speaks of laying buried in the bodies of her fellow campers, playing dead until Mr. Jingles left. But the ghost of one of those kids remembers seeing her standing amongst them, covered in blood and seeming unperturbed by all the carnage. The fact that Margaret makes fast friends with real life killer Richard Ramirez isn't exactly a point in her favor, either. It seems like she's hiding something, which is why fans have jumped on the idea that she's actually a murderer herself.

The prevailing speculation about Margaret is that she slaughtered the other campers and decided to pin the crimes on Mr. Jingles, an innocent man who worked at the camp. She got away with it by painting herself as one of the victims and cutting off her own ear. Mr. Jingles was sent away for 14 years before breaking out and returning to the camp to seek revenge against Margaret for his false imprisonment. If that's true, then Mr. Jingles certainly isn't innocent anymore; he's killed numerous people in the first two episodes, and some happened onscreen so viewers know it was really him.

Margaret's motive for murder could have been her religious hypocrisy. She often lectures the counselors about abstaining from sex, which she considers dirty or immoral. She rails against the growing sexual permissiveness in the culture. And, in the flashback to the original massacre in the 1970s, the campers were killed when they began to sexually experiment with one another. Margaret could be motivated by nothing more than a mission of purity. As Reddit user Lalinds797 posited, Margaret killed those kids for their perceived "sins."

It does make sense with Margaret's behavior. When she found out the ghost saw her amidst the gore, she closely questioned him about what exactly he saw and filled in the gaps for him. She could have used that opportunity to figure out if someone was about to rat her out, taking advantage of his memory lapses to plant the story she preferred. Or, Redditor sjmccorm theorized that Margaret went after the ghost when he witnessed her killing spree back in the '70s and ran him down so he couldn't talk.

However, there is a chance that Margaret being the killer is just too obvious. She's been emanating creepy vibes since Episode 1 so strongly that most fans have decided she's almost certainly the killer. If AHS wants a real surprise reveal, then the show should look elsewhere for their villain.