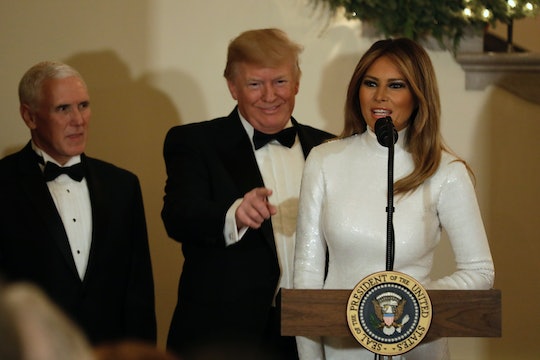 Yes, Melania Trump Attended The State Of The Union — But There's A Catch

Oh, that Melania Trump. She's something of a dark horse, isn't she? I mean, if you've managed to figure out what she's got going on behind those dark eyes, won't you share your intel with everyone else, please? Because she remains a mystery to me. I mean, as the rest of the world girds their loins in preparation for President Trump's State of the Union speech, you would think you'd know a little something about whether or not Melania would be on hand. But still.... who knows what she'll do? Is Melania Trump at the State of the Union address, or did she skip it for reasons the rest of us aren't privy to?

Well, it looks like Melania decided to take pity on us and just show up for her husband's big speech this year, his second ever State of the Union, although she apparently did so to promote something of her own agenda. Prior to the SOTU address, the First Lady announced that she would be bringing a very special person to Capitol Hill for the speech; a young boy who has struggled with bullying because of his name.

Now let me just say that Melania's choice of a guest, someone who is specifically bullied for having the last name Trump, speaks volumes. Not only does this young man's presence align itself with her anti-bullying campaign (although no offense to the First Lady, we haven't really seen a whole lot from her "Be Best" initiative), but I sense she can probably identify with Joshua on a grander scale. As someone who might feel rather bullied herself because of her own last name, although in her case it's perhaps slightly more to do with the man she married.

Of course, there were some people on the internet who took umbrage with the idea that Melania would defend one child while ostensibly not speaking up when her husband has a reputation for being a bully himself, as per The Washington Post.

Of course, Melania might have invited Joshua Trump as a symbol for all of the times she herself has felt bullied by the media, or her son Barron (who has struggled terribly in the past with bullying and was even bullied at school, according to HollywoodLife). Then again, Joshua Trump's presence might simply be as part of her "Be Best" initiative and little more than that. With the First Lady, it remains unclear. As per usual.

When it comes to messages, Melania Trump to go subtle and intractable at public events. Like at her husband's first State of the Union address last year, when she wore a white pantsuit and strode in on her own instead of with her husband, as CNN noted tends to be the tradition. There was talk that she might be rebelling, might be thumbing her nose at her husband via fashion and quiet statements.

But at the end of the day, we just never know what will happen with Melania Trump. I mean, at least she showed up for the State of the Union, right?