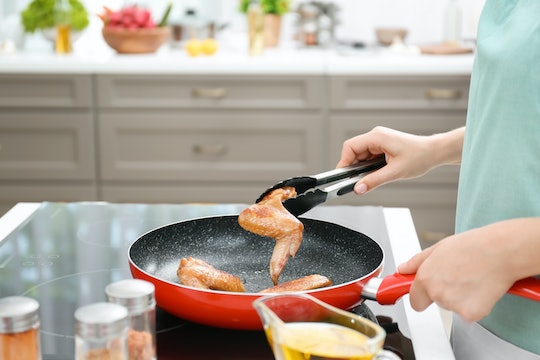 Through the years, consumers have become increasingly aware of what they are putting into their bodies. Which makes sense, if you think about it. As awareness about chemicals has increased, more of us are switching to organic food sources and avoiding (or limiting) highly-processed foods. (Knowledge = power!) However, completely protecting ourselves from harmful chemicals in food isn't that simple. And as it turns out, what we use to prepare our meals could also have an impact on our health. And recent news headlines probably have many people wondering: Is nonstick cookware safe?

Earlier this week, the Food and Drug Administration (FDA) presented findings from three studies at the Society of Environmental Toxicology and Chemistry's annual European meeting held in Helsinki, CNN reported. These studies looked at the prevalence of PFAS — a family of roughly 5,000 synthetic chemicals that are difficult to break down in our bodies and in the environment — also known as "forever chemicals" And what the FDA found, according to leaked documents, is quite troubling.

Because these "forever chemicals" have been used widely in things like nonstick cookware, food packaging, contact paper, cleaning products, and more — and as it turns out, they've also wound up in our food and water supplies.

One of the studies tested 91 samples of foods collected as part of the FDA's 2017 Total Diet Study. As CNN reported, 10 of 91 foods tested had detectable levels of PFAS —but at levels not considered to be of human health concern. Here's a closer look at what the FDA found, according to Vice:

A second study looked at samples taken from farmers' markets in a location in the eastern U.S. (Some of the samples were from a produce stand 10 miles downstream from a PFAS production plant.) The FDA’s documents revealed that PFAS were found in leafy vegetables, pineapples, and sweet potatoes, according to Real Simple.

The third study found contaminated milk at a dairy farm that was “within close proximity” to a New Mexico Air Force base that uses PFOS — which is a variation of PFAS — according to CNN.

These findings are understandably alarming, considering PFAS is linked to a number of health concerns — such as liver damage, certain types of cancers, thyroid disease, infertility, high cholesterol, obesity, and more. However, it's worth noting that the concentrations/risks aren't entirely known at this point. In a statement, the FDA noted:

Measuring PFAS concentrations in food, estimating dietary exposure and determining the associated health effects is an emerging area of science.

A spokesperson added that these examples of contamination — aside from the milk, which was declared "unfit for human consumption" and destroyed — were “not likely to be a human health concern.” The FDA's findings will be presented in an updated agency website about PFAS, according to CNN.

Which brings us back to the issues of nonstick cookware. And CookLight sums it up perfectly:

It's a valid point, right? So it might be a good idea to look into whether your nonstick cookware was produced with these "forever chemicals." Because I don't know about you, but as easy as nonstick cookware is to clean, I know I'd rather limit the concentration PFAS hanging out in my body as much as possible.

More Like This
Can The Baby Have That?
Bunmi Laditan Hopes There’s No Cooking in Heaven
This Is What Experts Say About Eating Hot Dogs During Pregnancy
The Covid Vaccine For Kids Under 5 Has Been Sent To The FDA For Review