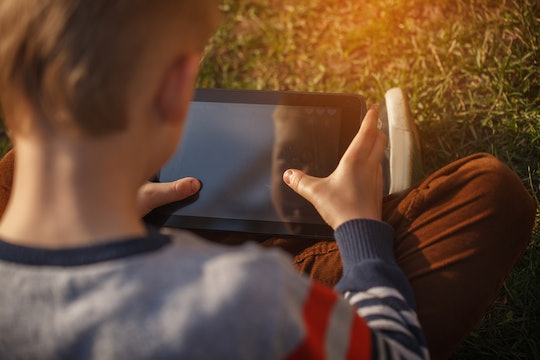 The Momo Challenge ls Probably A Viral Hoax, But Here's Why It's Still Important

Warning: This article contains information about suicide and self-harm, which some may find triggering.

If, like me, you're also a parent of young kids who like to watch strangers unboxing blind bag toys on YouTube, then you've probably made a point to ask if they've come across any potentially-upsetting images while watching. And specifically if it's taken the form of a truly-terrifying looking bird-inspired sculpture that's now come to be known online as "Momo." Concerns over the so-called "Momo Challenge" have gone viral recently, according to CNN, after stories began to circulate about children being encouraged to self-harm or commit suicide after connecting with a stranger posing as Momo on social media. But is the Momo challenge actually real?

Though you may have seen tweets and Facebook posts from police departments and schools warning about the Momo Challenge as of late, the consensus seems to be that it's little more than a viral hoax, as CNN reported, and that parents don't actually need to be lying awake at night concerned about Momo contacting their children online. The Atlantic reported, plainly, that it simply isn't real.

But it does sound like the fear incited by the Momo Challenge could be unexpectedly valuable. While Momo may not specifically be a threat — unrestricted use of YouTube and social media does carry other potential risks — the apparent hoax is a good reminder that parents need to be aware of what their children are seeing, and keep an open dialogue about social media use.

Though the Momo Challenge has been making headlines recently, it's not actually new at all. According to CBS News, concerns about the the online "game" also circulated last summer. At the time, the Momo Challenge was said to involve children contacting strangers claiming to be Momo via WhatsApp, at which point they would reportedly be sent disturbing messages and images, encouraged to engage in self-harm, and possibly even being told to commit suicide.

But David Mikkelson, the founder of fact-checking site Snopes.com, told CNN that there just doesn't seem to be much evidence that the Momo Challenge was ever a serious threat, and that it mostly seems to be "fear-driven exaggeration." (For its part, WhatsApp told CBS News that the company "cares deeply about the safety of our users" and "It's easy to block any phone number and we encourage users to report problematic messages to us so we can take action.")

This time, the recent second wave of Momo-related fear seems much less specific; parents appear to be less concerned about WhatsApp, and more worried about YouTube, even though the Google-owned platform tweeted Wednesday that it has "seen no recent evidence of videos promoting the Momo Challenge on YouTube."

The panic over Momo and YouTube does seem to at least be rooted in some much less horrific — yet still important — concerns about children's exposure to online content, and though it may not be as headline-grabbing as a "suicide game," it's definitely worth being aware of. For one, the very fact that the Momo Challenge has been gaining so much attention means that the scary images and stories associated with it are now everywhere, making it easier for children to be exposed to.

For young children, that essentially means inadvertently introducing them to a frightening "boogeyman"-style story that isn't actually real, something which, in itself, would be very upsetting. And for older children and teens, the Momo Challenge attention can mean highlighting narratives about self-harm that could end up seriously backfiring. As the UK Safer Internet Centre's Kat Tremlett explained to The Guardian, "Even though it’s done with best intentions, publicizing this issue has only piqued curiosity among young people."

In other words? We should really all give the idea of the Momo Challenge a rest. But we should probably also be using it as an opportunity to start thinking differently about the kinds of conversations we're having with our kids about online content, and the decisions we're making in regards to it.

For parents of youngsters, that may mean becoming more vigilant about what they're watching. As CNET Senior Editor Bridget Carey told WGN Radio on Tuesday, features like auto-play can mean kids can go from watching a totally benign cartoon on YouTube, to watching something "that actually is kind of violent sometimes and gross," without parents even really noticing. The answer in that case may be to avoid giving children unrestricted access to YouTube or YouTube Kids, or perhaps simply avoiding the platform entirely until they are older.

For older children, the Momo Challenge can also serve as a good reminder to parents that the inevitability of their online usage means we need to be helping them better navigate what they are seeing. As Carmel Glassbrook, manager of Professionals Online Safety Helpline explained to Forbes, the panic over the Momo Challenge is proof that adults would likely be much better off "ensuring the door is open for children to talk about these kinds of issues and teaching good practice rather than telling them there’s a big red button they mustn't push."

Some good ground rules parents may want to follow? Internet safety expert Paul Davis tells Romper he recommends parents keep children under the age of 13 off of social media entirely, and that, when trying to open up a conversation about topics like the Momo Challenge, they make sure to listen and ask open-ended questions to "get their take without 'leading the witness.'"

Above all though, Davis says it's important that parents don't jump to conclusions when they hear frightening headlines, and that they "do [their] homework before spreading fear."

Given that parents want to keep their children safe, it's entirely understandable that something that sounds — and looks — as scary as the Momo Challenge would cause a great deal of concern. But the real worry, it seems, is that we still largely seem to struggle when it comes to understanding how best to keep our kids protected while online.

So while the Momo Challenge clearly seems to be little more than a twisted hoax, it can at least be the beginning of an ongoing dialogue about internet safety, and the dangers of user-generated content that isn't always going to be appropriate for kids.

More Like This
Reddit Is Not Impressed With Dad Who Hid Neighbor's Gnome Because It Scared His Kid
5-Year-Old Boy Died In Hot Car As His Family Prepared For Sister's Birthday Party
'Squid Game' Is Coming Back For Season 2 On Netflix: Here’s What Parents Need To Know
The Covid Vaccine For Kids Under 5 Has Been Sent To The FDA For Review