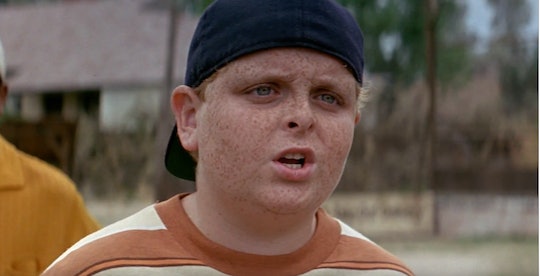 Introduce Your Kids To Squints, Ham & More Now That 'The Sandlot' Is Back On Disney+

There are certain movies that define a person's childhood — and plenty of millennial parents would likely agree that one beloved 1993 classic is among them. And good news, starting earlier this month, The Sandlot is officially back on Disney+ and your next family movie night is already planned.

While The Sandlot was available on Disney+ when the streaming platform launched, there was a brief period of time at the turn of the year during which some beloved classics temporarily disappeared, as Entertainment Tonight reported. Among them were Dr. Dolittle, Home Alone, Home Alone 2, Pirates of the Caribbean: On Stranger Tides, and, yup, The Sandlot. This happened without any warning from Disney, so Disney+ subscribers were justifiably confused.

A spokesperson for Disney+ explained to Gizmodo why that titles had left the platform due to issues related to legacy deals. The good news is, all of the movies will eventually return once those licenses expire. And as of Saturday, Feb. 1, The Sandlot has already returned and is available for your viewing pleasure, as Disney+ announced in a YouTube video over the weekend.

The Sandlot is a classic, coming-of-age story featuring a boy named Scotty Smalls as he finds his place through joining the neighborhood baseball team — at the urging of his mom, who practically begs him to "climb trees, hop fences, get into trouble." As part of the team, Smalls forms close bonds with a rag-tag team of misfits: Ben, Ham, Squints, Yeah-Yeah, and more. And in the process, they wind up teaching him a lot more about life than just baseball.

For many millennials, the film takes them back to simpler times — when they were permitted to run around their neighborhood without adult supervision. This concept is but a memory now, so The Sandlot is practically oozing nostalgia, which is why so many Disney+ subscribers are undoubtedly eager to watch it again — and to share the experience with their own children. So rest assured, Disney+ subscribers: Another generation will hear, "You're killin' me, Smalls!" and know exactly where it comes from.

More Like This
Marcel The Shell Is Officially A Movie Star
Where Are The Toys Of Toy Story Today?
Here’s What The Voices Behind The Characters Of Lightyear Look Like In Real Life
Why ‘Lightyear’ Is Banned In Several Countries — And Why You Should 100% Still See It