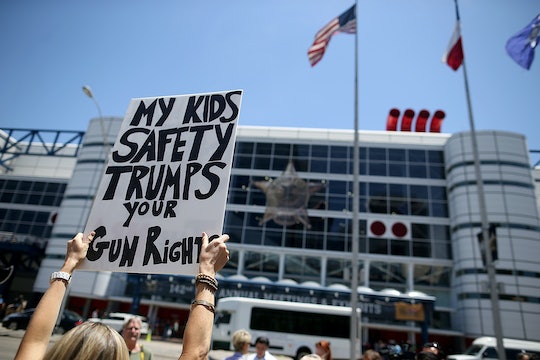 It's been less than a week since the mass shooting at Marjory Stoneman Douglas High School in Parkland, Florida, but students who survived the tragedy have already mobilized in a huge way. Just four days after witnessing the murder of 17 of their classmates and teachers, a group of students from the school are organizing a national march. Called the March For Our Lives, the march is a plea to the government for stricter gun safety laws. The central march will be in Washington, D.C., on March 24. Residents of other cities across the country who want to support the cause are undoubtedly wondering: Will there be a March for Our Lives in Los Angeles, too?

Update: A spokesperson told Romper via email that the starting point for the rally and march has been changed to the corner of 6th Avenue & Spring Street instead of Pershing Square.

Previously: West coasters are in luck — a March For Our Lives in the City of Angels is scheduled. Organizers have already made an Eventbrite for the L.A. chapter of the march, where they've shared initial details. On Saturday, March 24, at 10 a.m. local time, L.A. residents who want to stand with school shooting victims and survivors will gather in Pershing Square in Downtown Los Angeles.

About 2,500 people have clicked "going" on the event's unofficial Facebook page, and about 9,000 have clicked "interested." Those who would like to volunteer at the march are encouraged to contact March & Rally LA, an organization that helps plan marches in the city.

The march already has an official website, with a clear aim detailed on its homepage:

On March 24, the kids and families of March For Our Lives will take to the streets of Washington DC to demand that their lives and safety become a priority and that we end gun violence and mass shootings in our schools today.

The mission and focus of March For Our Lives is to demand that a comprehensive and effective bill be immediately brought before Congress to address these gun issues. No special interest group, no political agenda is more critical than timely passage of legislation to effectively address the gun violence issues that are rampant in our country.

The five students organizing the march are providing concerned Americans with hope that this shooting will be the one to finally convince lawmakers to actually prioritize gun safety. "People keep asking us, 'What about the Stoneman Douglas shooting is going to be different, because this has happened before and change hasn't come?'" Cameron Kasky, a survivor of the shooting and one of the march's organizers, told ABC News on Sunday. "This is it," he declared, referring to the March For Our Lives.

Kasky might just be right. Not only have numerous Americans expressed support (and plans to attend) the March For Our Lives, but a slew of celebrities have already donated funds to help the march run smoothly. After George and Amal Clooney donated $500,000 to the event, Oprah Winfrey, followed by Steven Spielberg and his wife, actress Kate Capshaw, matched their donation.

"George and Amal, I couldn’t agree with you more. I am joining forces with you and will match your $500,000 donation to ‘March For Our Lives,'" Oprah tweeted on Tuesday. "These inspiring young people remind me of the Freedom Riders of the 60s who also said we’ve had ENOUGH and our voices will be heard."

Stay tuned for more sister march locations — and if there isn't one scheduled in your city yet, consider planning a local march.