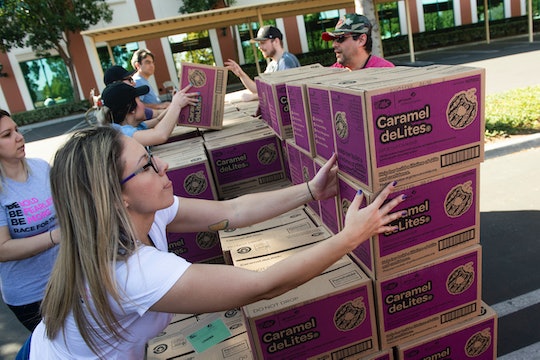 Timed perfectly to intercept everyone's New Year's resolution to cut out sugar and processed foods, it is Girl Scout cookie season, a massive low pressure system that moves over the country showering towns and cities with tagalogs, a band of sales-savvy moppets leading the way. I greet this time of year with the pure, uncomplicated joy of a thin-mint-loving feminist, but knew going in that 2020 would be a little different. This year, my 5-year-old is a "Daisy," so I have to help her foist as many trefoils and toffee-tastics on friends and family as possible. And, as it turns out, I'm weirdly competitive about my kid's cookie sales. I started out just a mom excited her kid had a troupe, but now feel like a late-stage Jordan Belfort, unable to keep from pursuing the sale and upping the goal until I've destroyed everyone and everything.

Now, I know what you're thinking "Hey, Helicopter Mom! Isn't your kid supposed to sell her own cookies?" and the answer is yes! Not only that, she's thrilled to be a be-vested little cookie pusher, a veritable Sheryl Sandberg of samoas. But she's 5, so she needs to be taken in hand quite a bit. Take, for example, her idea to set up a "cookie stand" in our front yard. Someone (I) had to tell her "OK, great entrepreneurial thinking! I love the enthusiasm! But, sweetie, we literally live in the middle of the woods and the only folks who wander into our yard looking for food are bears and foxes."

Then I had to tell her that bears and fox don't have money and can't buy do-si-dos. Then I told her we couldn't just give them cookies because the whole point was to raise funds for her troop. So as much as I'd love to let her lean in on this one, she she needs supervision and a guiding hand. I'm not doing it for her, but I'm helping her to be as successful as possible; think of me as the Kris Jenner of my daughter's cookie-selling career. And, as it turns out, like the real Kris Jenner, I'm way, way more into it than is probably normal.

I did not see this coming. In fact, I was filled with low-key existential dread about the whole thing. I get very uncomfortable on any end of a sales pitch. You know those mall kiosks where some guy walks right in your path and asks if you want to learn how to straighten your hair? I'm asthmatic as hell but I will run. And, hey, they're just people doing a job, but the situation is just too much for a people pleaser with limited funds (and already naturally straight hair) to handle.

The very thought of asking people to give me money, even if I was selling them something they wanted, was horrifying to me... until now.

The only thing worse than being asked to buy something is the thought of asking someone to buy something from me. You'd think someone who spent most of her professional life in non-profits — organizations that heavily rely on fundraising — would be a little more comfortable with the idea of asking people for money, but I think it's worth noting that despite having worked with three such institutions, I stayed far away from fundraising. The very thought of asking people to give me money, even if I was selling them something they wanted, was horrifying to me... until now.

We set out with what I thought was a doable goal: 50 boxes of cookies. But when we meet that within a few hours, something awoke inside me. I transformed from a lackadaisical slacker to Alec Baldwin in Glengarry Glen Ross. "A! B! C! Always! Be! COOKIE!" I get a high every time my kid makes her pitch and lands the sale, a veritable a dopamine rush when I get a notification that she's sold another five boxes on her website (oh yes, they have cookie websites now; we've come a long way since we were Brownies, folks).

I've tried to figure out what's prompted this complete 180. Maybe it's my goal-oriented, hyper-competitive Capricorn streak shining through. Maybe my newfound drive is a manifestation of my unwavering and profound love of the Girl Scouts. Maybe it's having a common goal with my daughter. Maybe her enthusiasm is contagious (she's constantly pitching ideas about where to find "my customers"... OMG "my customers" I cannot!)

Whatever the reason, I'm (shockingly) loving it.

After every sale, we sit down at our kitchen table together and write a thank-you note. (Which, admittedly, was my idea but she was all over it.) She can't actually write yet, but is happy to have me take dictation. "Dear [So-And-So]" she begins, oozing executive confidence. "Thank you for buying cookies! I hope you like them! Loooooooove, Gioia."

She signs her name and draws a picture, and in this moment I understand a huge motivating factor for me: she is driven and self-assured in a way I'm not, or maybe learned not to be along the way, and I want to encourage her. (It's almost as though she's building the skills and experiences the Girl Scouts cookie drive is meant to instill in her!)

In conclusion: if anyone would like to buy a box of cookies, DM me for a link to my kid's website. Tell your friends. I know we can surpass our latest sales goal if we tap into new markets! (Always. Be. Cookie, bishes.)

Image caption at top: Volunteer Katie O'Neill, 29, of Orange, and several of her First American Title co-workers stack Caramel deLites as they load up vehicles during the Girl Scout Cookie Mega Drop at the Anaheim Business Complex in Anaheim.

More Like This
How My Neurodivergent Son Taught Me To Move Through Life In A Wholly Different Way
35 Relatable Quotes That Prove Being A Mom Isn’t Easy
As The Non-Bio Mom, I Always Felt Like My Son’s “Other Mother”
Way Too Many Parents Have Zero Plans to Talk About Sex With Their Kids