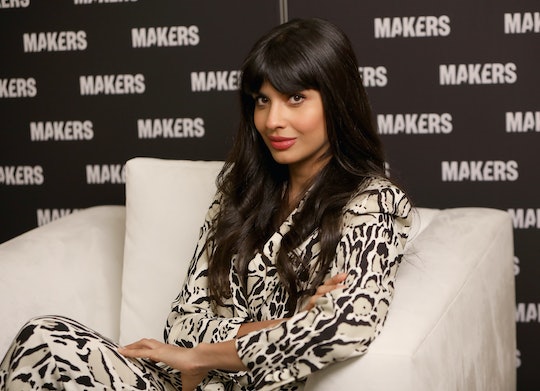 If you've been paying attention to news headlines at all within the past few months, then you've likely seen the phrase "abortion ban" or "heartbeat bill" many times. That's because in several states, legislation has been introduced — and actually passed — that severely limits a woman's constitutional right to an abortion. The American Civil Liberties Union (ACLU,) among other organizations, are already challenging these highly restrictive laws. In the meantime, though, people across the nation are horrified at the thought of a woman being forced to carry an unwanted pregnancy. And recently, Jameela Jamil opened up about her abortion amid new laws affecting a woman's right to choose.

This week alone, both Alabama and Georgia have passed two of the most restrictive abortion bans in the nation. The Alabama State Senate passed House Bill 314 on Tuesday. It bans nearly all abortions — with no exceptions for rape or incest, according to CBS News. If signed into law by Governor Kay Ivey, it would ban all abortions except when "abortion is necessary in order to prevent a serious health risk" to the woman. Meanwhile over in Georgia, Gov. Brian Kemp has already signed a bill that would make abortions illegal if a fetal heartbeat can be detected, USA Today. It does include an exception for rape and incest — as long as the pregnancy is at 20 weeks or less and a police report is filed about the rape/incest. It's set to take effect on Jan. 1, 2020.

In response to Georgia's law, Jameela Jamil took to Twitter to share her thoughts — and personal experience — on the topic of abortion. The Good Place actress tweeted on Monday, "This anti-abortion law in Georgia is so upsetting, inhumane, and blatantly demonstrative of a hatred of women, a disregard for our rights, bodies, mental health, and essentially a punishment for rape victims, forcing to carry the baby of their rapist."

In another tweet, Jamil continued, "I had an abortion when I was young, and it was the best decision I have ever made. Both for me, and for the baby I didn’t want, and wasn’t ready for, emotionally, psychologically and financially. So many children will end up in foster homes. So many lives ruined. So very cruel."

As CNN reported, actress Milla Jovovich also opened up about per past abortion in light of recent anti-abortion legislation in Georgia.

"Our rights as women to obtain safe abortions by experienced doctors are again at stake. Last Tuesday, Georgia Governor Brian Kemp signed a draconian bill into law that outlaws all abortions after six weeks — before most women even realize they’re pregnant — including in cases of RAPE OR INCEST," she wrote on Instagram. "This makes Georgia the sixth state to pass such a restrictive six-week abortion ban, joining Ohio, Mississippi, Kentucky, Iowa, and North Dakota. These laws haven’t been passed yet, but lawmakers in these states are trying." Jovovich continued:

Abortion is hard enough for women on an emotional level without having to go through it in potentially unsafe and unsanitary conditions. I myself went through an emergency abortion 2 years ago. I was 4 1/2 months pregnant and shooting on location in Eastern Europe. I went into pre term labor and told that I had to be awake for the whole procedure. It was one of the most horrific experiences I have ever gone through. I still have nightmares about it. I was alone and helpless. When I think about the fact that women might have to face abortions in even worse conditions than I did because of new laws, my stomach turns.

To me, It's amazing that these women are coming forward to share their experiences. It's unfortunate, however, that male lawmakers attempting to make decisions about our uteruses is practically forcing more women to share their stories. (Perhaps before they're ready.) Or maybe they never planned to publicly announce their decision to end a pregnancy in the first place. Because abortion is such a personal decision between a woman and her doctor, after all. And that's exactly how it should remain.

More Like This
Keep Talking To Your Kids About Abortion — It's More Important Than Ever
OB-GYNs On How The End Of Roe Changes How They Can Care For Us
Considering Getting A Tattoo While Pregnant? Here’s What To Know
When Does Pregnancy Horniness Kick In?