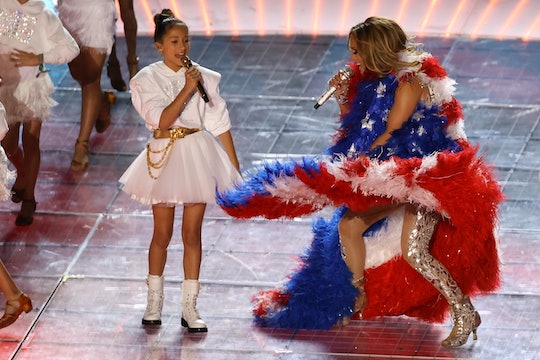 J.Lo's Daughter Emme Is Her Clone & Their Halftime Performance Has Us Shook

This year's Halftime Show got an extra special guest and it's going to take us all a while to process. Jennifer Lopez and her daughter Emme performed at the Super Bowl with her and it was a sight to behold. And, yes, it was seriously sweet to boot. Emme, who may or may not be an actual clone of her amazing mama, joined Lopez and Shakira onstage towards the end of her mom's set, lending her pipes for “Let’s Get Loud” and “Waka Waka."

Lopez was a Halftime front liner, along with fellow superstar Shakira. But towards the end of her set, she brought another Latin lady on stage with her: her 11-year-old daughter Emme. Together, the two of them performed a couple of songs while Shakira banged it out on the drums.

Emme's appearance on stage wasn't a complete surprise. Lopez teased footage of her rehearsing with Emme the week before the game, posting a slideshow of photos to Instagram with the caption, "I love when Lulu visits me at rehearsals..." with the hashtag #rehearsalbelike, adding "5 DAYS!!!!"

Lopez's fiancé Alex Rodriguez also commented on the halftime show and suggested that surprises were in store. Speaking with Entertainment Tonight, he said that while he wasn't going to elaborate too much, "You'll see something at FOX you've never seen before, it's going to be large."

This isn't the first time that Emme has teamed up with Lopez for a performance in front of a large crowd. She also performed a mother-daughter duet during Lopez's It’s My Party Tour last year. She jumped on stage with dancers when Lopez was performing her newer ballad “Limitless” and they wrapped the song up with as a pair.

Emme basically looks like a littler version of her mom, with her singing abilities completing the clone conspiracy I've formulated since seeing them sing together. The two of them were the finishing touch on a perfectly executed halftime show and I am here for it.