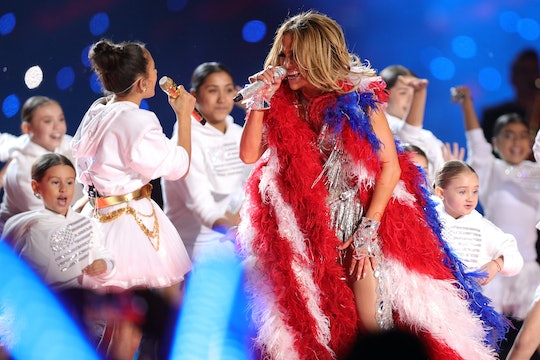 If you didn't know who Emme Muñiz was before, I'm willing to bet you do now. Jennifer Lopez's daughter's quotes about her mom show that their bond goes a lot deeper than just performing on the Super Bowl Halftime stage together. They share a special relationship and have experienced a lot together in Muñiz's 11 short years.

Muńiz got her singing start when the world caught wind of her rendition of Alicia Keys' hit song, "If I Ain't Got You" back in May. The video took Twitter by storm and the young singer has been captivating audiences ever since. On her 11th birthday last February, Lopez shared a video of her daughter singing “How Far I’ll Go” from the Disney movie Moana, and Muñiz slayed then too. Mother and daughter gave audiences a sample of their combined talent during Lopez's It's My Party tour in June when Muñiz joined her mom on stage to sing "Limitless" in every performance.

Most recently, the duo dominated the Super Bowl LIV halftime show, performing “Let’s Get Loud” and “Waka Waka," while Lopez's co-star Shakira played the drums. In light of so much time of stage together, let's take a look at some of the things that Muñiz has said about her relationship with her mom and show business.

On Her Favorite Person:

With all of those dancers around her, Muñiz still prefers her mom over everyone.

"Being up on stage, the dancers are all behind me. Every show, I look in a different direction to see who's behind me. My favorite person to see: my mom," she said in a behind-the-scenes tour video on Lopez's YouTube channel.

On Keeping Her Focus On Mom

With so much going on around them, Muñiz said in a June 2019 YouTube video that she just keeps her focus on one person:

Usually the light is too bright for my eyes so I can't see anybody ... so I just look at mom.

On Whether Or Not She Gets Stage Fright

Muñiz is no newbie when it comes to performing, so it makes sense that she's a bit more comfortable on stage than your average tween. Speaking about her performances on tour, according to the Los Angeles Daily News, she said:

When I was little, I used to be really shy singing in front of people. But not anymore 'cause in school I'd have like singing stuff, I was in a play. So, I've done this before. But not like this.

Practice makes perfect, she said in the same YouTube video: "So, I like rehearsing, 'cause a couple hours later you're going to be on stage in front of like 20,000 people; and that's a lot of people and it's a lot of fun."

It's clear that Muñiz's music career is only beginning, but she can rest assured that her mom will be there guiding her every step of the way.

More Like This
Janet Jackson's Son Eissa Is A Little Musical Prodigy In The Making
Jennifer Hudson Is A Proud Mom, An Accomplished Artist, & Now An EGOT Winner
Jenny Slate Played Our Parenting Edition Of Never Have I Ever & Here’s What We Learned
Kim Kardashian Had To Pause A TV Interview To Shush Her Noisy Sons In The Audience