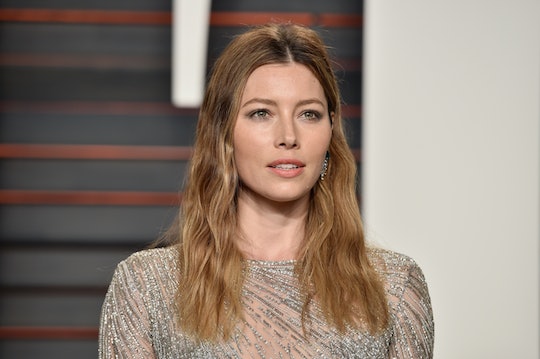 Amidst one of the worst measles outbreaks the country has seen in decades, actress and mom of one Jessica Biel met with anti-vaxxer activist Robert F. Kennedy Jr., posing for a photograph with him, in Sacramento. The two were reportedly lobbying against a pro-vaccination bill that was recently introduced in California that would limit the number of medical exemptions for childhood vaccinations.

UPDATE: On Thursday morning, Biel took to Instagram to clarify her stance on vaccinations and her concerns with the proposed bill she lobbied against with Kennedy. "I am not against vaccinations — I support children getting vaccinations and I also support families having the right to make educated medical decisions for their children alongside their physicians," she wrote on Instagram, adding that her "concern with #SB277 is solely regarding medical exemptions."

Biel went on to share that her "dearest friends have a child with a medical condition that warrants an exemption from vaccinations, and should this bill pass, it would greatly affect their family’s ability to care for their child in this state" and that was her reasons for speaking with legislators in Sacramento and arguing "against this bill."

"Not because I don’t believe in vaccinations, but because I believe in giving doctors and the families they treat the ability to decide what’s best for their patients and the ability to provide that treatment," Biel wrote on Instagram. "I encourage everyone to read more on this issue and to learn about the intricacies of #SB277. Thank you to everyone who met with me this week to engage in this important discussion!"

EARLIER: "Please say thank you to the courageous @jessicabiel for a busy and productive day at the California State House," Kennedy captioned a photo of himself sitting with Biel on Wednesday, and headlines about Biel's stance on vaccinations — first reported by Jezebel — quickly cropped up as well as concerned comments penned on the actress' Instagram page from fans.

Romper has reached out to Biel's team multiple times for confirmation and clarity on her stance on vaccinations and has not yet received a response.

The controversial state vaccine bill — also known as SB 276 — would limit medical exemptions from vaccinations and would "track doctors who issue a disproportionate number of exemptions," as HuffPost explained in April. Ultimately, the legislation would make it more difficult for parents to opt out of vaccinating their child without a legitimate medical reason that's been verified. The bill is still "currently under review," according to CNN.

Kennedy is a known and prominent anti-vaxx activist. And though Biel has yet to share her stance publicly, Kennedy confirmed that he and Biel were lobbying against SB-276 in a phone call with The Daily Beast, but he would not specifically "align Biel" with the anti-vaxx movement.

"I would say that she was for safe vaccines and for medical freedom," Kennedy told The Daily Beast, adding, "The biggest problem with the bill, which is something I think Jessica is concerned with is that a doctor who has made a determination — if he has found children in this state whose doctors have determined that they’re too fragile to receive vaccinations — this bill would overrule the doctors and force them to be vaccinated anyways."

Kennedy told The Daily Beast he believes Biel's main concern surrounding SB-276 is the political "red tape" that would enforce parents to vaccinate their children.

Biel — who has one son, 4-year-old Silas with husband Justin Timberlake — has never officially or publicly confirmed whether she's pro or anti-vaxx, though tabloids have previously reported on the matter. Back in 2015, In Touch Weekly quoted a supposed source and friend of the couple who said Biel "is refusing to vaccinate" their son and that "she feels that vaccination could cause complications." Timberlake's stance on vaccinations is not publicly known.

Regarding Kennedy's photos with Biel posted on Wednesday, the actress did leave a comment on one of her, Kennedy, and Democratic Assemblywoman Autumn Burke, writing: "Great meeting with both of you today!"

The anti-vaxx movement has been growing at an alarming rate as of late and public health officials are concerned. The U.S. Centers for Disease Control and Prevention (CDC) consistently reminds people that vaccines are proven by science to be safe and effective and that vaccines don't just protect yourself or solely your children, they help protect others from spreading preventable diseases.

According to the World Health Organization (WHO), vaccines have likely prevented "at least 10 million deaths" around the world, and that figure is only from 2010 to 2015. Health officials say in the time since, it's estimated that "many millions more lives were protected from illness" thanks to vaccines, according to WHO.

This week, the CDC confirmed the ongoing measles outbreak in the United States has reached a shocking high, with a whopping 1,022 confirmed individual cases of measles so far in 2019, and the "majority of people who got measles were unvaccinated." And California, where Biel was lobbying, is currently facing an outbreak in multiple counties.

Despite the proven science behind vaccinations and having the luxury of modern medicine easily accessible, many parents in the United States still choose to not vaccinate their children. According to research from 2016 from the National Center for Biotechnology Information, the four main reasons include "religious reasons, personal beliefs or philosophical reasons, safety concerns, and a desire for more information from healthcare providers."

Though Biel has yet to publicly confirm her stance on vaccinations, her appearance with Kennedy this week has sparked criticism and concern from many.