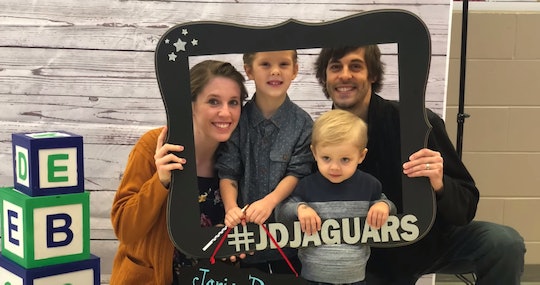 Knowing that the Duggar kids were all homeschooled by their highly conservative parents, Jim Bob and Michelle, it's surprising to hear that Jill Duggar has registered her son for kindergarten, marking a first in her generation of the ever-expanding family.

Over the weekend, Jill revealed her oldest son, Israel, will be heading to kindergarten during the 2020/21 school year. "Look who’s registered for kindergarten!" she announced alongside a photo of herself, her husband Derrick Dillard, and her sons Israel, who's almost 5, l and Samuel, 3. In the photo, Israel is posing with a cardboard frame that reads, "#JDJAGUARS."

"How did you feel when your first went off to kindergarten?" Jill, who no longer appears on TLC's Counting On, wrote on Instagram. "Any tips?" Up until this point, Jill has been exclusively homeschooling her children; the mom of two has periodically shared via social media what she's been working on with her sons.

Considering Michelle and Jim Bob Duggar opted to homeschool their 19 children, Jill keeping her boys at home and teaching them there was not shocking. And upon hearing news of his kindergarten enrollment, most of Jill's followers expressed their excitement for this next chapter.

"This is just too much!!!! He’s too big now!!!" one follower commented. "He is going to do amazing at Kindergarten!!! That first day is hard momma but it gets easier and when he comes home bursting with joy about all the fun he had it makes it easier!"

Another shared, "I have done both homeschooling and sent them to school. My kids loved being in school with kids their own age while I continued lessons that I wanted to teach them at home. Being in school prepares them for the work world, while I prepare them for the spiritual aspect. He will love it. It’s hard on mommy, but when he rushes home to tell you about his day, you’ll know you made the right decision."

Plenty of fans wondered if Israel will be the first of the Duggar grandkids to attend a public school. (Spoiler alert: It seems he will be.) As one Instagram user pointed out, the only other Duggar couple with school-aged children is Josh and Anna — and they do homeschool their kids.

Fans also speculated that although Jill is the first Duggar to enroll a child in school, she likely won't be the last. "I have a feeling at least Jinger if not more of the others will follow suit when their kids get older," one Instagram user wrote. "Someone has to be the first and I applaud Jill for choosing something different."

Lately, it seems, Jill is turning away from a number of "rules" — or at least tendencies — of her upbringing. She recently cut off a significant amount of her hair, for example, even though the Duggars have expressed having long tresses is based on their understanding of the Bible. Not to mention, she wears pants and has a nose ring. There's also been talk of Jill stopping at two kids because she reportedly gave their crib to her sister-in-law Kendra, which is interesting, considering the Duggars' views about birth control.

Not that any of this is particularly scandalous for the average person, but for a Duggar daughter? It's kind of a big deal. While the Duggars have traditionally stuck with homeschooling, kudos to Jill for forging her own path when it comes to her kids' education.