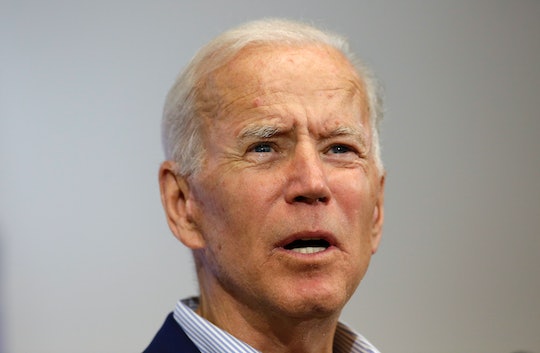 A recent comment made by former VP and 2020 presidential hopeful Joe Biden on the campaign trail is raising some eyebrows on social media. In fact, people on Twitter were not particularly happy with Joe Biden's comment to brothers of a 13-year-old girl, some labeling it as inappropriate and, well, pretty dated.

As Liz Goodwin of The Boston Globe reported on Twitter on Wednesday, June 12, Biden was in Iowa for a campaign event this week when he met a voter at a coffee shop ahead of time. The 76-year-old presidential hopeful — who announced his candidacy back in April, according to The New York Times — met the voter's grandchildren, one of whom was a 13-year-old girl. And, according to Goodwin's reporting, after Biden questioned the teen on her age, he then reportedly turned to her brothers and said, "You've got one job here, keep the guys away from your sister."

Romper has reached out to Biden's campaign team regarding the comment and the backlash it has since attracted, but did not receive an immediate response.

Regardless of the fact that eight women came forward to accuse him of inappropriate behavior earlier this year, according to The Cut, this is not the first time Biden has made a rather cringe-worthy comment or has been accused of being out of touch and insensitive with his comments to women. For instance, back in April, CNN reported that Biden made multiple jokes about "having permission to touch people" after several woman made allegations he had made them uncomfortable in the past.

Though Biden addressed the allegations made against him at the time — saying in a video posted on Twitter that he "will be more mindful about respecting personal space in the future" and that he understands "social norms are changing" — he made a cringe-worthy comment while speaking with a young girl back in May. As Refinery 29 reported, Biden had told a 10-year-old girl he bet that she was "as bright as you are good looking" at an event in Texas.

An argument could be made that these sort of jokes and comments — older people playing into outdated gender stereotypes in a way that might seem gentler than some of the more overtly misogynistic comments by the sitting president — are innocent, I suppose. But, as it seems, many on social media are really not loving that Biden doesn't seem to be letting up with his awkward stand-up routine on the campaign trail.

One person wrote that "[Biden] needs to catch up" with the realities girls and young women face.

Another person commented that such comments "also teaches the boys that the reason girls need protection is because boys are natural predators. We need to undo THAT conditioning as well."

Others had a more brutal take on it all.

And one more shared on Twitter, "If #JoeBiden could stop sexualizing children that'd be great kthx."

Whether or not you are bothered by Biden's off-the-cuff remarks, you should absolutely be concerned that it appears he cannot seem to read the room. If people are bothered by these incredibly outdated comments, why not just knock it off and move on? After all, 59 percent of his voting base is female, according to PEW Research, so this would seem to be an important issues to take to heart.