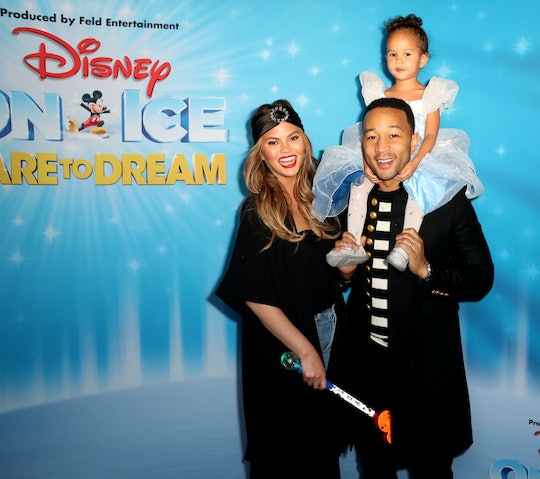 John Legend seems to pride himself on getting Valentine's Day exactly right. He has even called himself the "King of Valentine's Day" in the past, so a person could be forgiven for thinking he's all about the grand gesture. But apparently he's more down to earth than that; John Legend and daughter Luna made Valentine's Day pancakes in the shape of hearts, and honestly there is just nothing better than that.

Legend and his wife, the Mayor of Twitter Chrissy Teigen, are parents to 3-year-old daughter Luna and 21-month-old son Miles. As People's "Sexiest Man Alive" of 2019, it seems as though the pressure to pull off the most perfect Valentine's Day in history would be pretty frightening. But don't worry, the EGOT-winner didn't let it get to him. Instead he decided to utilize the little people in his lives and do double-duty. He and his daughter Luna, also known as the sassy Queen of the Internet, got together on Friday to do a little holiday cooking. They made heart-shaped pancakes to celebrate the day of love, which would certainly be appreciated by Cravings cookbook Teigen as an expression of being appreciated by her husband and daughter. (Presumably they all shared in said pancakes but still, it's the thought that counts.)

Legend and Luna's heart-shaped pancakes were a hit with his followers on social media who wrote messages like "So sweet! Making memories for years to come! Setting great examples of love and family," although another follower thought he could try a little harder: "My wife added red food coloring to make the heart shaped pancakes. You gotta up your game Legend!"

This isn't the only thing Legend did for Teigen on Valentine's Day either. On Friday he was a guest host on Ellen and shared a tribute clip to Teigen's feet, if you can believe it, since she had previously noted that she doesn't like the way they look. The video shows a montage of Teigen's feet while Legend's song "All Of Me," which he wrote for her, plays softly in the background.

It's not easy to find ways to express your love on Valentine's Day, not even for a singer who has made a living in love songs like Legend.

So why not enlist your daughter for some heart-shaped pancakes? The tribute to the feet was nice and all, but edible gifts are always the best.

More Like This
Princess Charlotte Is Ready To Be A Soccer Star, Too
North West Flips The Bird During Family Photos
Prince George Hosted A “Little Cake Sale” For One Of His Dad's Favorite Charities
Kim Kardashian Had To Pause A TV Interview To Shush Her Noisy Sons In The Audience