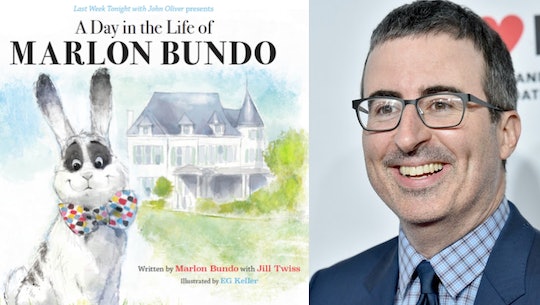 The world already has a million reasons to love razor-sharp comedian John Oliver. But now, there are a million and one, because John Oliver released a children's book about Vice President Mike Pence's pet rabbit, Marlon Bundo, falling in love with another boy bunny. That's right, it's sweet, progressive, and deliciously petty.

The Last Week Tonight host devoted a whole segment of his HBO show to Pence on Sunday night, and while Oliver had plenty of criticisms for the vice president, he did like one thing about Pence — his pet bunny. Turns out the VP and his family have an adorable rabbit named Marlon Bundo (which is, as Oliver acknowledged, "an objectively good name for a bunny"). After some time as an Instagram star, Bundo got his own book, written by Pence's wife Karen and daughter Charlotte, entitled Marlon Bundo's A Day in the Life of the Vice President.

Unsurprisingly, given the VP's not-so-tolerant views on LGBTQ issues, one of the stops on the Bundo book tour is at Focus on the Family, an anti-LGBTQ organization that, according to the Human Rights Committee, invests "in public education campaigns against LGBTQ equality," while helping related organizations support "radical anti-LGBTQ candidates who work against basic civil rights and legal protections."

Naturally, this infuriated Oliver. So he and his team fought back in the best possible way — by putting out their own rival children's book about Bundo.

"Congrats Pence, you even managed to ruin Marlon Bundo,” Oliver said on his show Sunday night. “None of us can enjoy a book about your rabbit. Or can we?" Then he announced the release of A Day in the Life of Marlon Bundo, written by Last Week Tonight writer Jill Twiss, and illustrated by EG Keller.

In the better Bundo book, as Oliver put it, the VP's rabbit has a bowtie. Oh, also, he falls in love with another male rabbit, and the two decide to get married, but not without facing some obstacles along the way.

There are so many amazing things about this book. First of all, the proceeds will go to The Trevor Project, which supports LGBTQ youth, and to AIDS United, which aims to end the AIDS epidemic in the United States. That means that you can get your family a funny, charming children's book while supporting a couple of good causes. Secondly, as Oliver pointed out on his show, "selling more books than Pence will probably really piss him off," and who doesn't want to do that?

If that's not enough to convince you, perhaps you'll be interested to know that the audiobook version of the story features an all-star voice cast, including Jim Parsons as the titular rabbit, Modern Family's Jesse Tyler Ferguson as Marlon's love interest, and celebrity faves like Ellie Kemper and RuPaul rounding it all out.

And if, somehow, you're still not convinced that this is the greatest news in a long time, skip to the 17:58 mark in Oliver's Sunday night segment to get a sneak peek of the utterly charming book:

As Oliver put it:

This is a real children's book. This isn't some adult book telling Mike Pence to go f*ck himself, although in buying it, that's exactly what you would be doing. This is a sweet story about Marlon Bundo falling in love.

A spokesperson Regnery Publishing, which put out the Pences' book, said in a statement regarding Oliver's book, according to CNN:

It's unfortunate that anyone would feel the need to ridicule an educational children's book and turn it into something controversial and partisan. Our and Mrs. and Charlotte Pence's goal is -- and will continue to be -- to educate young readers about the important role of the vice president, as well as to highlight the charities to which portions of the book proceeds will be donated.

Oliver has pulled some amazing stunts over the years, including buying ad time on Fox News and creating a series of commercials to educate President Donald Trump, who watches the network with... startling frequency.

But this new move may be one of the best things Oliver has ever done. Already, A Day in the Life of Marlon Bundo is a number one bestseller on Amazon, so it seems like the internet agrees.

More Like This
Nebraska Judge Rules Two Mothers Cannot Appear On Their Sons' Birth Certificates
Quinta Brunson Got A Sweet Card From A Kid On Abbott Elementary After Her Emmy Win
'Squid Game' Is Coming Back For Season 2 On Netflix: Here’s What Parents Need To Know
Quinta Brunson Had To Give Her Emmy Speech With Jimmy Kimmel At Her Feet