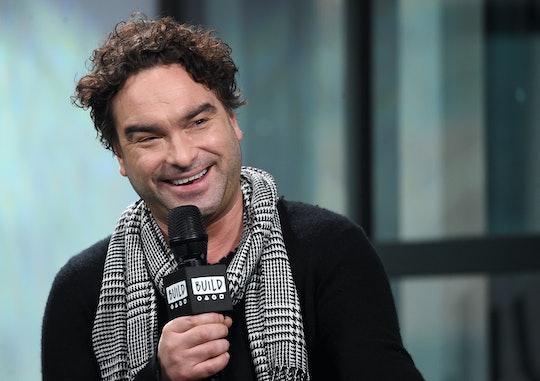 Johnny Galecki & His Girlfriend, Alaina Meyer, Are Pregnant With Their First Child

Is Hollywood going through a baby boom? Yet another celebrity has just announced that he is about to become a father. Actor Johnny Galecki and his girlfriend are pregnant and expecting their first child, reports PEOPLE. The Big Bang Theory star announced the exciting news on his Instagram, along with some beautiful photos of his girlfriend, Alaina Meyer, with whom he went public with in September 2018, according to the report.

"We are absolutely over the moon to announce that we will soon be welcoming a little one into this crazy and wonderful world," Galecki wrote as the caption on Instagram when the photos were posted on May 3. The first photo appears to be a selfie of the couple both wearing their glasses, while the second shows them embracing each other on the beach. "We ask that you please respect our privacy during this celebratory time for us and our families. There truly is love out there for all. We hope ours is the ember of yours, as we feel yours is the ember of ours."

The exciting news comes at a bittersweet time for Galecki, as he just celebrated the end of production for The Big Bang Theory after twelve seasons of being on-air. Galecki brought Meyer as his date to the show's wrap party the night before they announced they were expecting.

Meyer seemed just as excited as Galecki to share the news, posting the same selfie of the couple on her own Instagram just moments after he did. "So happy to announce that we are having a baby! There couldn’t be a better blessing in the world for us and we are over the moon happy," Meyer wrote, sharing a nearly identical sentiment to Galecki's caption. "We appreciate as much privacy in this time as we are celebrating with close friends and family, and we are happy to share the news with you."

Just four months before announcing their pregnancy, Meyer was forced to shut down rumors that she and Galecki were secretly married. The rumors started after the pair were spotted wearing matching rings on their left ring fingers, as Us Weekly then reported, but Meyer did not hesitate to shut down the speculation with a response on social media.

Meyer shared the above photo of herself and Galecki with their matching rings visible and a caption that read: "#notmarried yet..." The caption included the pink heart emoji with a yellow ribbon wrapped around it, as well as the winky face emoji at the end. While Meyer and Galecki may have been happy to set the record straight, it seems pretty obvious these two were already planning a long future together.

For now, Meyer and Galecki are clearly very happy just being in love and starting a family together. Here's to hoping they get the privacy and respect they deserve as they await the arrival of their first child together.

Until then, you can watch the series finale of The Big Bang Theory on May 16 on CBS.

More Like This
Prince George Hosted A “Little Cake Sale” For One Of His Dad's Favorite Charities
Kristen Bell Just Hinted That 'Frozen 3' Is Maybe (Hopefully!) In The Works
Meghan Markle Proves Once Again She's Totally Going To Be A Snack Mom
The Heartfelt Details You Didn't Notice In Kate Middleton & Prince William's Portrait