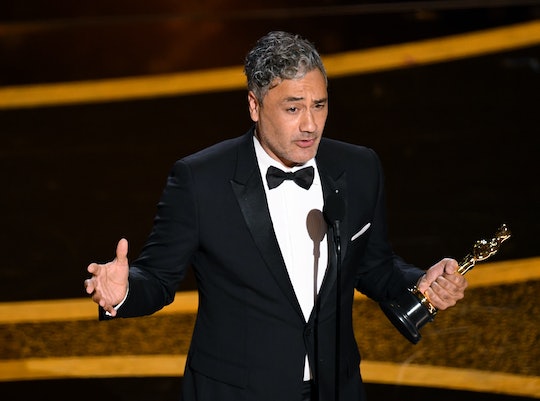 'Jojo Rabbit's Taika Waititi Made The Most Meaningful Oscar Dedication

The most inspiring thing about an awards show like the Oscars is watching what happens when one winner lifts up an entire community, and that's what happened tonight when Taikia Waititi won the Academy Award for Best Adapted Screenplay. After thanking his mother (aww), the director, writer, and star of Jojo Rabbit dedicated his award to "all the indigenous kids in the world," a group very near and dear to his heart.

Like so many award winners, the New Zealand native made sure to thank his mother in his speech — though he was also just giving credit where credit was due, considering the fact that Waititi's mother gave him the book that he based Jojo Rabbit on (Caging Skies by Christine Leunens).

"I'd like to thank my mother... for being my mother," he said, "and for many other reasons, and for giving me the book that I adapted. This film wouldn't have existed without you doing that."

Then, Waititi went on to address a demographic he once belonged to himself:

"I dedicate this to all the indigenous kids in the world, who want to do art and dance and write stories. We are the original storytellers, and we can make it here, as well."

This speech was especially meaningful because Waititi is the first person of Maori descent to win an Oscar, according to Yahoo! News, and the only indigenous person to be nominated in this category. His words show that he knows just how symbolic his success is for so many people.

And what a success: Jojo Rabbit was nominated for six Oscars, including Best Picture. There's no doubt that these wins are just the beginning for a group of people who have been underrepresented and underserved for far too long. In a statement released when the film came out, reported Polygon, Waititi explained the personal inspiration behind the film:

"I experienced a certain level of prejudice growing up as a Māori Jew, so making Jo Jo Rabbit has been a reminder, especially now, that we need to educate our kids about tolerance and continue to remind ourselves that there’s no place in this world for hate. Children are not born with hate, they are trained to hate."

Powerful words from a powerful artist.

More Like This
Kristen Bell Just Hinted That 'Frozen 3' Is Maybe (Hopefully!) In The Works
Here’s What The Voices Behind The Characters Of Lightyear Look Like In Real Life
Emma Thompson Shotputs A Child As Miss Trunchbull In The Matilda Musical Trailer
It's A Beautiful Day In Jenny Slate’s Neighborhood