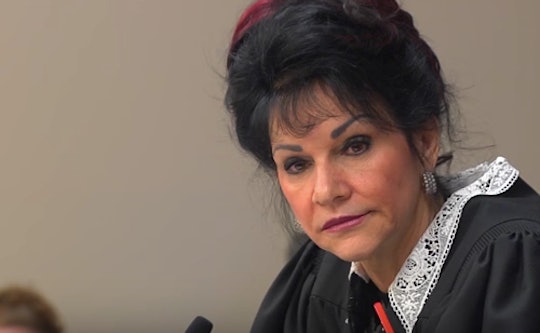 After the former USA Gymnastics doctor plead guilty to seven counts of criminal sexual conduct stemming from the sexual assaulting young athletes in his care, Judge Rosemarie Aquilina sentenced Larry Nassar to 175 years in prison, telling him, "I just signed your death warrant," according to Fox 5 San Diego. Aquilina's poignant statement underscored the gravity of Nassar's crimes; she also reportedly told the defendant, "I find that you don't get it, that you're a danger. You remain a danger. I'm a judge who believes in life and rehabilitation when rehabilitation is possible … I don't find that's possible with you."

Nassar has already been sentenced to 60 years in prison for federal child pornography charges, and is still awaiting sentence for three charges of criminal sexual conduct in a separate case, according to CNN. Wednesday's sentence pertained to seven counts of criminal sexual conduct in Ingham County, Michigan, but Aquilina allowed 168 victims and their family members to read impact statements before sentencing, spanning seven full days in court. Victims described a pattern of abuse perpetrated by Nassar for more than two decades. Assistant Attorney General Angela Povilaitis requested that Nassar serve 125 years in prison, calling him "possibly the most prolific child sexual abuser in history."

Prior to his sentencing, Nassar made a brief statement saying that "There are no words that can describe the depth and breadth of how sorry I am for what has occurred," and the victims words "have shaken me to my core." Aquilina responded, "I hope you are shaken to your core. Your victims are clearly shaken to the core."

Nassar's statement is starkly at odds with a six-page letter he sent the court last week, which Aquilina read from on Wednesday. In it, he claimed that he was a "good doctor," and that his practice of penetrating girls as young as 6 with his bare hands, "was medical, not sexual," according to NBC News. CNN reported that he also claimed in the letter that his victims were "lying for media attention and financial reward," and accused Aquilina of running a "media circus" for her own personal gain. "This isn't worth the paper it's written on," the judge responded. "There's no truth in here. It's delusional." As for Nassar's claims that his repeated assaults were actually medical treatment, Aquilina said, "I wouldn't send my dogs to you, sir."

Aquilina contended that while Nassar's statement claimed remorse for his crimes, the letter clearly showed that he refused to take responsibility for what he'd done, telling him, "You've done nothing to deserve to walk outside a prison again," and that "It is my honor and privilege to sentence you," according to The New York Times. The judge also lamented the inadequacy of her power to truly serve justice, explaining that "Our constitution does not allow for cruel and unusual punishment," but if it did, "I would allow someone — or many people — to do to him what he did to others," according to CNN.

Nassar also complained in his letter to the court that he might be unable to handle listening to his victims speak in court, according to USA Today, which Aquilina dismissed:

You may find it harsh that you are here listening but nothing is as harsh as what your victims endured for thousands of hours at your hands, collectively. You spent thousands of hours perpetrating criminal sexual conduct on minors. Spending four or five days listening to them is significantly minor considering the hours of pleasure you had their expense and ruining their lives. None of this should come as a surprise to you.

After the sentencing, Aquilina told the media that she will not be giving any interviews regarding the case, according to MSNBC's Joy Reid, because "It's just not my story." Really, there's just nothing left to say.