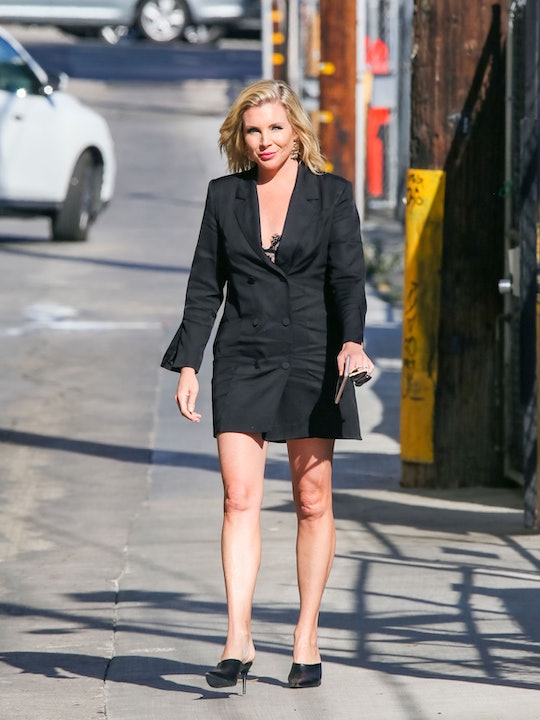 "It was right after the 2016 election. I was staring at a 3-month-old at that point and really experiencing so much grief and sadness and fear and was questioning what I was doing and what I was offering the world and whether my time and talent could be served elsewhere," Frankie & Grace actor and now author June Diane Raphael tells Romper via phone. "Should I run for office?" she wondered. "Should I engage in the world in a completely different way?"

These two lingering questions led to Raphael's new book REPRESENT: The Woman's Guide to Running for Office & Changing the World. Co-written with Kate Black, former chief of staff at EMILY’s List, a political action committee that helps elect pro-choice Democratic female candidates to office, the book was everything Raphael couldn't find when she considered running for office herself. (Raphael has not launched a campaign to run for office yet.)

"That’s really what inspired the book: my curiosity. And then starting the research and realizing that there wasn’t really a roadmap and this specific engagement is really mysterious for most of us and kept away from many, many people. I think intentionally so," Raphael says. "And I started getting really curious about how the process worked and that is what started the journey of writing the book."

That led Raphael to Black, who after discussing the barriers that keep women, especially mothers of young children, from running, the current stats on women representation, and why women run for office, was asked by Raphael to co-write the book. ("It was one of those things when you go home at the end of the day and you turn to your partner and they're like, 'What did you do today?' and you say, 'Oh, I think I signed up to write a book today,'" Black tells Romper via phone.)

Three years later, the book offers information on how to evaluate your financial situation as a potential candidate, including whether or not you should quit their job or would need to continue to work while running for office; a template for a two-week time log that allows you to track, half an hour or hour by hour, how you're spending your time to see what you can take on and what you cannot (including a campaign); and other practical advice. The book is not just a blueprint but a tool that both Raphael and Black hope more women, especially moms with young children, will use in 2020 and beyond.

"Most of us have this idea that [running for office] is something women should do when their kids are older and out of the house," Raphael says. "What's interesting to me about that is that I've actually never had more to offer than I do now, with small children. I've never felt so urgent. I've never felt so passionate. I've never felt so demanding of change, so I think we're really dismissing a hugely powerful political group when we take mothers out of the equation."

Even Black admits that, in writing the book with Raphael, she was forced to reexamine what she believes to be possible for women with small children.

"June was like, 'If I want to run for office, I know that I want to keep some time sacred with my young children. I want to be there for wakeup, and I want to be there for putdown and dinner.' And reflexively I thought, 'Oh, how are we going to do this? Because your opponent is going to be using that time for campaigning, for raising money, and for events. You’re taking a lot of opportunity and time that you could be working with voters or getting your message out off the table," she says. It was during talks with June, and after looking what other mothers have done in their own campaigns, that Black started to rethink what's feasible for moms vying for public office.

Reexamining what is considered "normal" is a big part of the book, Raphael says. In 2018 a record number of women, many of them moms with small children, ran for, and won, office. As a result, there is now the Moms in the House Caucus — a group of 21 Democrats and four Republican mothers of school-age children, created by Rep. Debbie Wasserman Schultz (D-Fla.) — to better support mom politicians.

And still, women only represent about 25% of the Congressional population. Examining why this is, what barriers have been put up, intentionally and unintentionally, to keep women and mothers out of office, and [our own ]internal biases and beliefs that reinforce an exclusive, patriarchal, white supremacist institution is one of the more difficult aspects of the book and, for Raphael, deciding to run for office.

I hope that when he’s old enough to read this we aren’t talking about the fact that Congress is 25% women and almost half the states have never had a woman governor.

"Investigating our own sexism and our own internalized misogyny and racism and participation in a white supremacist culture and looking at the ways in which we uphold these things — we have a whole cheat sheet in the book that addresses this very issue," she says. "We are part of this culture, and a lot of it is operating without our consent, as we say. So for white women, it’s really examining the racism in ourselves and the ways in which we uphold this culture and also our own sexism."

For Raphael, that includes redefining the work associated with motherhood, both paid and unpaid.

"There are mothers who want to be with their children full time and do that important work," she says. "And I think that work needs to be thought about differently and valued differently."

Raphael doesn't want to fall into the "essentialist trap" that all women are great leaders. "I don’t believe that and I think that there are women, lots of women, that I wouldn’t vote for," she says. But she does believe that more women need to be at the table. "I think there’s something powerful about, or at least I find powerful, about being willing to say 'I radically love and support women.' I think that’s important."

And that's what Raphael and Black aim to do with their book: help more women, especially mothers of young children, run for office so that our government fulfills the promise of "We The People."

"I hope [my son] reads this and is so proud of what June and I were able to do for so many women," Black says. "I hope that when he’s old enough to read this we aren’t talking about the fact that Congress is 25% women and almost half the states have never had a woman governor. I hope when he reads this he looks around and says, 'Mom, wow. We don’t really need this book anymore.' Women are running things up and down. There are 50% women in Congress. We have had more women governors than ever and women are mayors and are leading everywhere he looks. I hope that that’s the future that he sees."