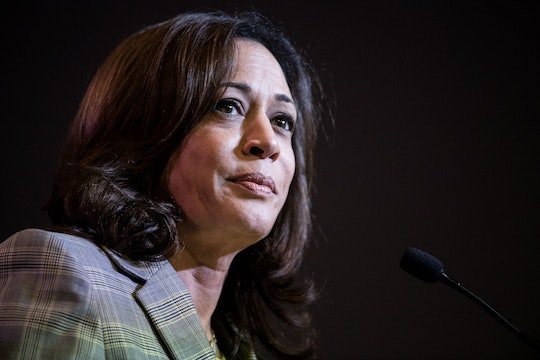 As night two of the 2020 Democratic debate began on Thursday, there were a number of mic-drop moments from a few different candidates. Certain answers elicited applause from the audience and immediately blew up on social media. And one of these instances went down when Kamala Harris promised to "release children from cages" at the 2020 debate.

According to The Atlantic, Harris was asked what she would do, specifically, with the thousands of people who attempt to seek asylum in the United States. Sen. Harris didn't skip a beat with her emphatic response.

“I will immediately put in place a meaningful process for reviewing the cases for asylum and release children from cages and get rid of the private detention centers," Harris replied. "And ensure that this microphone that the president of the United States holds in her hand is used in a way that is about reflecting the values of our country and not about locking children up.” Cue: wild applause from the audience.

Harris' remarks at the 2020 Democratic debate were also widely applauded on Twitter. One person tweeted, "Asked about asylum, @KamalaHarris condenses immigration agenda, deplores kids in cages and shows how to push the crowd button when she talked about the power of a president having a microphone in HER hand. She knew exactly what she was doing....."

In fact, the literal applause was heard across the nation.

Those who tuned in to the Democratic debate probably noticed that Harris had more than one mic-drop moment on Thursday. As USA Today reported, candidates began talking over one another toward the beginning of the debate. "Hey guys, you know what, America does not want to witness a food fight," she said to her fellow Democrats once she was called upon by moderators. "They want to know how we're going to put food on their table." Bam!

But back to kids in cages.

"Let’s be clear about what that point is and that moment is in the stage of a human’s development. Because age is more than a chronological fact. There are phases of childhood that can never be replaced, phases of childhood that when that child experiences trauma, it will have lifelong impact," she said. "Phases of life during which a child is so innocent and needs love and needs nurturing and needs that love and nurturing from their parent. Harris continued:

It cannot be replaced by anyone else, and certainly not by the cage in which they are now being housed. So let’s look at where we are. It’s a child’s worst nightmare.

If viewers were unsure about Harris' stance on the atrocities that are still happening at the U.S.-Mexico border, they shouldn't be now. Because she didn't beat around the bush in the slightest. Between her "release kids from cages" comment — and her other mic-drop moments — her performance at the 2020 Democratic debate will absolutely be remembered.