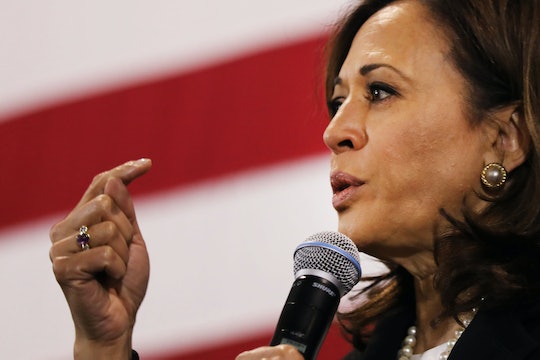 The focus on women's rights continues this week with an eye on maternal health. It's hard to believe that in this day in age, not all mothers are treated equal in the eyes of healthcare professionals. Even worse? One group in particular is being affected most. Presidential hopeful, Kamala Harris is pushing a bill that would protect black mothers against healtcare biases.

Today, Harris reintroduced the Maternal Care Access and Reducing Emergencies (Maternal CARE) Act, to further address the growing maternal health crisis for black women, according to The Root. The bill is being co-sponsored by a number of other presidential hopefuls including Senators Cory Booker, Bernie Sanders, Amy Klobuchar and Elizabeth Warren. While the bill originally stalled in Congress last year, it's being re-introduced and updated, according to Politico.

Despite all the medical advancements over the years, the United States still has the highest maternal death rate in the industrialized world with approximately 700 women dying from pregnancy-related complications each year, according to NPR.

Across the board, African American women are suffering the most as they are three to four times more likely to die of pregnancy related complication than white mothers, according to the National Partnership for Women and Families. That statistic does not discriminate, either — it affects those across all socioeconomic backgrounds.

Even Beyoncé (Pre-eclampsia) and Serena Williams (blood clots) had issues with their pregnancy, despite bringing their concerns to the doctors and having access to the best help available, according to CBS News. If even they can't get appropriate healthcare, who can?

Combine this with the fact that only 87 percent of black women of reproductive age have health insurance and the state of healthcare for women of color is at an all time low, according to The Hill.

"Black mothers across the country are facing a health crisis that is driven in part by implicit bias in our healthcare system. We must take action to address this issue, and we must do it with the sense of urgency it deserves," Harris said in a statement to Refinery29. "My Maternal CARE Act will establish implicit bias training throughout the medical profession and help ensure that women — especially black women — have access to comprehensive, culturally competent care."

Overall, the bill would increase access to affordable, reliable, culturally competent care, according to CBS News.

Specifically, the C.A.R.E Act would establish two grant programs. One would give $125 million to fund at home pregnancy medical programs for high risk individuals who need heath care and social service guidance. The other would give $25 million to medical schools, nursing schools, and other health-related professional training programs to address medical biases that face black women and contribute to sub par healthcare, according to Refinery29.

Congresswoman, founder and co-chair of the Black Maternal Health Caucus told The Root:

We cannot address the black maternal health crisis facing this country until we address racial disparities in healthcare. The Maternal CARE Act will confront the persistent biases in our health system to ensure Black women have equal access to the quality pre- and post-natal care they deserve.

One such bias, that still happens to this day, is the belief that Black patients have a higher threshold for pain, even though there is no scientific research behind it, according to the Washington Post.

Women need more people like Harris on their side, those who aren't afraid to ruffle feathers and bring harsh truths to life. Despite political affiliations, these are problems that need to be addressed.