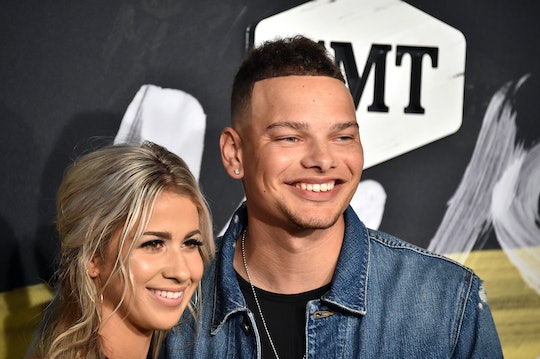 Country music fans, rejoice! Because it looks like there's a little one on the way for one popular country star. That's because Kane Brown and wife Katelyn Jae announced they're expecting their first child, according to People.

The couple made the announcement on Monday, April 15 via Instagram. Alongside a photo of a sonogram, Brown wrote, "It’s been so hard keeping this a secret!!!!! But the KB’S ARE GONNA BE PARENTS!!! KB3 🤗🤗🤗🤗🤗 IM GONNA BE A DADDY!!!!!!!!!!!!!!!!!!!!!!!" Judging by the sheer number of exclamation points, it's probably safe to say the expecting parents are thrilled about the news. And it looks like Brown's fans — and fellow artists — are pretty psyched about it, too. Jason Aldean wrote, "@kanebrown_music so happy for u guys man. Cant wait to meet that kid." Jason's wife, Brittany Aldean, commented, "EEEEEEEEEK!!!!!!💜💙💜🙌🏼."

The mom-to-be even left a comment on her husband's, writing, "Baby daddy 😂🔥."

Less-famous — but equally excited — Instagram users also expressed their love for the parents-to-be. One person wrote, "Omg this makes me so happy I know you’re going to be a great dad and Kate will be a fabulous mom. Congratulations❤️❤️."

Another fan commented, "Omg dying i had a feeling this was coming 😭."

Katelyn also spilled the baby news via Instagram on Monday. Except, the expecting mom opted to share a video of the ultrasound. "The coolest day of my life by far. I barely could stop laughing / crying to let her get pictures but I am soooooo happy and excited," she wrote. "@kanebrown_music I love you so much & am so excited to have an addition to our family to share our everyday fun, travel , & love with💕."

Apparently, Brittany and Jason Aldean have been looking forward to the Browns starting a family for quite some time. "She keeps asking if we're having one," he told Taste of Country in November. "Katelyn wants to wait until she's, like, 30. I'm not complaining." (Considering the mom-to-be is 26, it seems as if those plans have changed!)

Kane and Katelyn tied the knot on Oct. 12, 2018 outside of Nashville, according to Nash Country Daily. Brown shared a photo of himself and his bride via Instagram just one day after their nuptials — and the newlyweds opened up about their relationship with People right around the time of their wedding. "We prioritize time together and make sure to have as much normalcy as possible with date nights and nights at home with our dogs,” the couple told the publication. “And we have a great appreciation for each other and respect each of our careers and time to do their thing as well. We love each other but are also friends — it’s so important to have that balance.”

It isn't yet clear how far along Katelyn is in her pregnancy. But I have a feeling both she and Kane will be sharing their journey via Instagram as the weeks continue to count up to her due date. One thing, however, its crystal clear: They're over the moon about becoming a family of three. Congrats to the parents-to-be!

More Like This
Post Malone Just Revealed He's Welcomed His First Child AND He's Engaged!
OB-GYNs On How The End Of Roe Changes How They Can Care For Us
Considering Getting A Tattoo While Pregnant? Here’s What To Know
22 Summer-Inspired Names For Your Totally Laid-Back Baby Boy