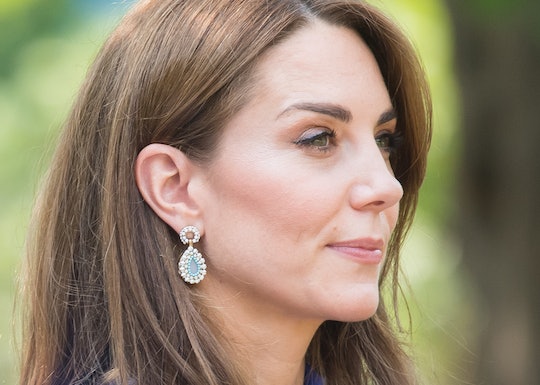 Maybe you're familiar with it: That persistent nagging feeling that you're not quite getting it right as a mother. Maybe it's something specific like not breastfeeding for as long as you'd planned, or just a general sense of failing your child. No matter the form it takes, mom guilt is the actual worse and its nature is such that no one is immune. Heck, even Kate Middleton struggles with "mommy guilt," as she explained during a recent interview.

The Duchess of Cambridge, who shares Prince George, Princess Charlotte, and Prince Louis with Prince William, was in Birmingham at the launch of her survey 5 Big Questions on the Under Fives, which explores the difficulties that come from early parenting. While there, she met with the host of Happy Mum, Happy Baby, Giovanna Fletcher to talk about her work and her own experiences. Middleton discussed her work with the mental health campaign The Early Years, her pregnancies, her own childhood, and the pressures that modern parents face. In that conversation, Middleton touched on her own experiences with "mommy guilt" as a working mom.

At one point in her life, Middleton understandably found herself struggling with the weight of dividing her time between her important work and her family. "I was having doubts and questions ... and the guilty [feelings] about being away for work and all of that," she said, but a friend gave her some reassurances that took some pressure off of the "nuclear family" mindset where the bulk of nurturing falls on the shoulders of parents alone by urging them to create a community.

"We need people around us," Middleton said. "The more people you have around your children who are safe and loving and caring, the better. So yeah, it was a real weight off my shoulders that it's not totally my responsibility to do everything. Because we all have good days and bad days and if you can dilute that with others who aren't on that day particularly struggling, I think it makes such a difference for your child."

When Fletcher asked Middleton outright if she still struggles with mom guilt, the duchess and mom of three was quick to respond, "Yes, absolutely! Anyone who doesn't, or says that [they don't] is actually lying."

Indeed, a survey by baby care product company NUK found that 87% of mothers feel guilty at some point, with 21% reporting that they feel this way most or all of the time, as The Telegraph reported.

"It's a constant challenge," Middleton went on to say. "You hear it time and time again from moms, even moms who aren't necessarily working but are pulled in different directions sort of having to juggle life and family life. There's always something. And you're always sort of questioning your own decisions and your own judgement. I think that starts from the moment you have a baby." At this, the host jumped in to clarify that the mom guilt kicks in "from the moment you have a baby in your tummy, not even in your arms."

And if you were ever wondering how to kick your mom guilt up a notch, imagine spending your life studying the impacts of early life on your lifelong mental health. That's what Middleton and the Early Years team do every day. "I feel a huge responsibility, because you know, the amount of what I've learned the last few years is so fascinating and I definitely would've done things differently even during my pregnancy knowing the importance of the early years," she said.

The open and honest conversation that Middleton and Fletcher shared is an example of the changes that the Duchess of Cambridge is hoping to bring about. "It’s going to take a long time — I’m talking about a generational change— but hopefully this is the first small step: to start a conversation around the importance of early childhood development," she said. "It’s not just about happy, healthy children. This is for lifelong consequences and outcomes."