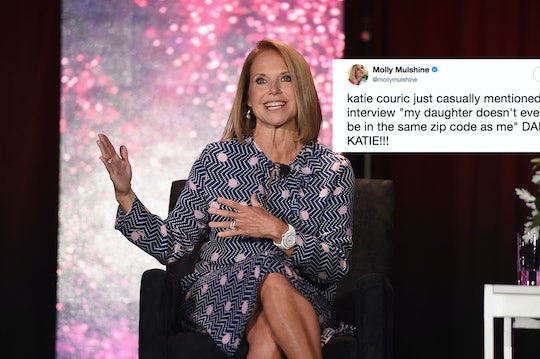 When it comes to talking about their children, parents tend to be a little embarrassing — even if they don't intend to cause any harm. When your parent is a super famous journalist and TV personality, it can make things a little worse, especially when they take that embarrassment to live TV. During the Olympics opening ceremony, Katie Couric said her daughter "doesn't want to be in the same zip code" as her and it had a lot of people cringing in the best way possible.

The Olympics are the one time, every two years, where people get invested in the stories of the national athletes competing for their country. And each time the Olympics airs, they do an amazing job at getting getting you to care about these athletes. Their stories are inspiring and the sheer power they possess with their body, to win medals for their country, is even more inspiring.

During the interview, Couric revealed that her own daughter can't stand to be in the same zip code as her. Excuse me?

As a way to humanize the athlete, Couric pulled off some amazing self deprecation. But instead of coming off as more human, and making the athlete look better, Couric basically made herself look worse. Like, a lot worse. People could not get over this, taking to Twitter to share how hilarious this moment truly was.

And you thought your relationships with your mom and dad were bad.

It's a good thing a lot of parents only have Facebook to embarrass their children on and not live television. Because if they did have that platform, in typical parent fashion, they'd probably use it to embarrass the crap out of their kids, just as Couric did.

So who is Couric's daughter who can't stand to live in the same zip code as her? Couric actually has two daughters, which means she has twice the opportunity to embarrass both of them. Ellie Monahan is Couric's 25-year-old daughter, according to Heavy. Ellie graduated from Yale University in 2013, according to her Linked In profile, and interned at super cool places like HBO and Glamour. But other than this information that exists on the internet, it seems like Ellie tends to keep a pretty low profile and you really can't blame her, especially after the comments her mom just made on TV.

22-year-old Carrie Monahan is Couric's youngest daughter. Carrie is currently a student at Stanford University in California, according to her Linked In profile, were she studies American Studies and French. Although both girls tend to keep a low profile for what is likely a good reason, Couric is pretty vocal about how much she loves her daughters through her Instagram account, sharing the most adorable throwback photos you might ever see. Seriously, you will never find a cuter throwback Thursday than you will on Couric's Instagram.

But Couric's daughters could live in separate zip codes and keep their private lives to themselves, not because they're embarrassed by their mother or want to get away from her but because they want to do their own thing. Living with a famous parent is probably pretty hard (I wouldn't know) so you can't blame Ellie and Carrie for wanting to distance themselves (if that is what they're doing).

Although people might have thought that Couric embarrassed herself on live television, absence does make the heart grow fonder. By living in different zip codes, Couric's daughters are making their next reunion so much sweeter. Until then, they'll have their mom's comment made during the Olympics for posterity.

More Like This
How Amber Heard Plans To Explain The Trial To Her Daughter
Obamas Issue Powerful Statements After Supreme Court Ends Roe v. Wade
This Map Illustrates Just How Many States Would Ban Abortion If Roe V. Wade Is Overturned
Keep Talking To Your Kids About Abortion — It's More Important Than Ever