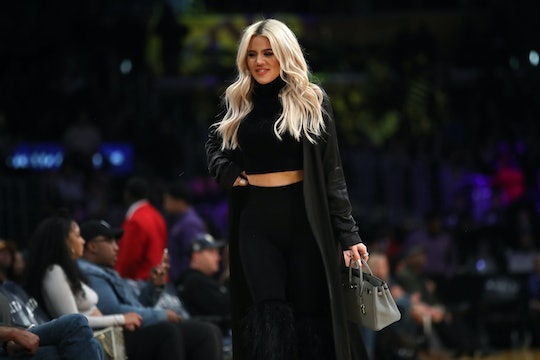 Khloé Kardashian is having the time of her life with her 10-month-old baby girl True Thompson. Not a day seems to go by without some adorable update from the proud mom, and I should know because I'm always checking. What can I say, I'm a sucker for a cute baby. While the Good American jean designer is always happy to share her life with her daughter, she's also well aware of the downside of being so exposed: dealing with other people's opinions. Like, constantly. Fortunately Khloé plans to protect True from body shamers in a pretty healthy way, and apparently she's already started.

The new mom knows all too well how it feels to live constantly in the spotlight, with people always telling you what they think of you (and, rather unfortunately, so much of what they seem to want to say is negative). In fact, Khloé recently told Stellar magazine that she never once considered herself overweight until Keeping Up With The Kardashians started on television. Before that, her family protected her from potential body shamers; as per The Daily Mail; "I never, ever considered myself chubby or overweight. I didn't know that I was until I went on TV, and everyone told me that I was 'fat.'"

What a horrible thought, that a young woman was perfectly comfortable in her own skin and then had that taken away from her by the cruelty and judgment of strangers. Especially when her own family clearly tried to encourage her to feel good about herself. As she explained to Refinery 29 in December, she managed to stay confident with her family's support:

No matter the criticism I've received in my life, I've never believed any of it because my family made me feel otherwise.

The Body Revenge host is taking the lesson taught by her own family to heart. She is working to make sure True, already a social media star, doesn't get pressured by body shamers. As Khloé told Stellar, she has a routine with her little girl already:

We sit in front of the mirror. It's so corny: 'I am beautiful!' It's my job to make her feel, no matter what she looks like, that she is strong and confident and beautiful, and it's okay to embrace all different shapes, sizes, and ethnicities.

Khloé isn't the only member of her family who is thinking of the future when it comes to her kids and self esteem. Kim Kardashian-West wrote about her daughter North in a 2016 essay (when the little girl was just two years old), as per MTV:

As North gets older, she’ll start to be more aware of herself and her body. Her attitude toward her body is directly related to my own, so it’s my responsibility to make sure she understands that positive body image comes from having a healthy self-esteem.

Sure, not everyone is doing daily affirmations in the mirror with their baby. But not everyone is a Kardashian either. I think these moms have the right way of it, particularly considering their unique lifestyle.

Because those little girls are going to be growing up on the internet. They're going to need some sort of serious armour to protect themselves, and their mothers are there to make sure they get it.