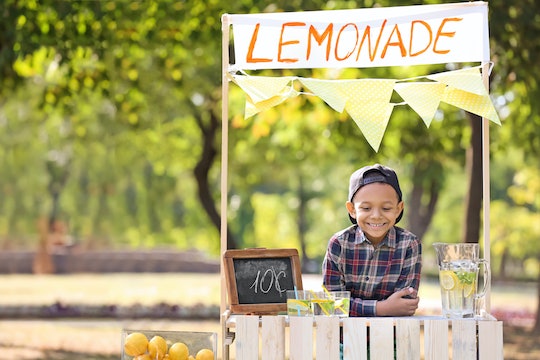 Kids selling lemonade in the summer is such an iconic and popular pastime that it almost comes across as a cliché, which is one reason why I was shocked to learn that children in Texas can't legally sell lemonade without a permit. Yep, you read that correctly — it's currently "illegal" for minors to set up a lemonade stand, but that mind-boggling rule is set to change in September thanks to a new "common-sense" law courtesy of Texas Rep. Matt Krause.

When I first saw the news about this lemonade stand drama, I did a double-take because I couldn't for the life of me understand why a child would need a permit to run a lemonade stand on the street. It's not like they're trying to sell moonshine or running an underground poker game, right? But this strange rule reared its head in June 2015, when two sisters in Overton, Texas, Andria and Zoey Green, set up a lemonade stand to raise funds for Father's Day present, according to ABC News.

Essentially, the Green sisters needed what's called a Peddler's Permit, a piece of paper stating that they're legally allowed to sell the product on the street. "It's illegal to sell lemonade without a permit," Overton Police Department Chief Clyde Carter told ABC News at the time. "But we didn't tell them to shut down, we just asked them to get a permit."

The girls' mother claimed, however, that they had to get licensed by their town's health department before receiving the permit, ABC News reported. Talk about a major headache.

Given all of the red tape, the girls decided to ask for donations instead of selling the drinks for money, according to USA Today.

In response to the head-scratching regulation, Texas Rep. Matt Krause, a Republican, decided to introduce House Bill 234, a measure that would legalize "the occasional sale of lemonade and other nonalcoholic drink stands run by minors on private property," according to CNN.

It would also "make it illegal for kids under 18 to need a license, permit or fee to occasionally sell lemonade," according to ABC affiliate KVUE.

The Texas Senate unanimously passed the bill in May, a development that sent the bill to Texas Governor Greg Abbott, which he signed Monday. "It’s now legal for kids to sell lemonade at stands," he captioned a Twitter video of himself. "We had to pass a law because police shut down a kid’s lemonade stand. Thanks to ⁦@RepMattKrause⁩. #txlege#LEMONADE."

To drive the win home, Abbott cheered his young constituents with a glass of lemonade, referring to the law as "common-sense."

Shortly after Abbott shared the video, countless parents took to the post's comments section to thank him for his efforts.

"Thank you so much!! My 6 year old has been asking since [he] was 4 to do a lemonade stand and we’ve had to tell him no," one person penned. "I’m so excited to share this with him! We’re headed to the store to buy lemons first thing in the morning!!"

Another user commented: "I don't live in Texas, but I'm glad you did this Governor. I have a lot of fun childhood memories of lemonade stands, and it really doesn't make any sense not to allow it. (Plus who doesn't want ice cold lemonade in the Summer?)."

Someone else joked: "Dang all these years I’ve been livin' life on the edge lmao."

I think this whole lemonade issue in Texas goes to show that there are many odd laws in need of updating. Kids should be allowed to sell lemonade without a permit and it's great to see the state taking action. Cheers all around.

More Like This
Swedengate Brought Up A Lot For Me
This Is Not A Drill: TWIX Is Releasing A New Cookie Dough Flavor
Obamas Issue Powerful Statements After Supreme Court Ends Roe v. Wade
This Map Illustrates Just How Many States Would Ban Abortion If Roe V. Wade Is Overturned